CUP: Yeley and Team’s Valiant Effort In Qualifying Ends With A Short Night At Richmond 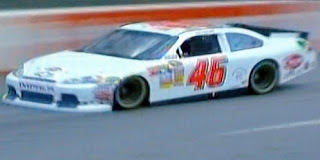 J.J. Yeley picked up the 4th last-place finish of his NASCAR Sprint Cup Series career in Saturday’s Crown Royal presents the Matthew & Daniel Hansen 400 at the Richmond International Raceway when his #46 Red Line Oil Chevrolet fell out with electrical problems after he completed 38 of the race’s 400 laps.

Eight races into a season that began with his blown engine 11 laps into the Daytona 500, resulting in what was his most recent last-place finish, J.J. Yeley and the Whitney Motorsports team have finished just one race in 2011, a 26th-place finish at Talladega two weeks ago. In that race, Yeley took over for Bill Elliott, who qualified the car, but the effort was not able to bring the team any closer 40th in Owner Points, 72 points outside the Top 35.

Though just one team would miss the field for Friday’s race, qualifying was still a game of inches for the #46 team. Following an engine failure in Happy Hour, the team’s backup engine would see its first laps when it mattered most. With just a handful of cars left to time into the race, Yeley’s task was to run a faster time than Tony Raines, whose lap in the Larry Gunselman #37 was then slowest among the “go-or-go-homers.” Then, at the last possible moment on his final lap, Yeley managed to edge Raines for a spot in the race by just one thousandth of a second: a 21.516 second-lap (125.488 mph) to Raines’ 21.517. Ultimately, Raines also made the race after Brian Keselowski, seeking to make his return to the Cup Series following gallbladder surgery, ran a lap just over three-tenths slower than Raines.

Yeley’s engine change forced him to surrender the 38th spot on the grid, joining Joe Nemechek, who voluntarily fell back from 26th for what turned out to be a short night for him as well. Yeley and Nemechek were among the first cars to lose a lap during the first 50 laps and, soon after, both pulled behind the wall under green. Yeley edged Nemechek by two laps, securing his second last-place finish of 2011. After slowing on the backstretch, he drove directly to the hauler, and debriefed with the team on the car’s handling over the radio.

LASTCAR STATISTICS
*Yeley’s last-place finish in a Chevrolet ends a streak of seven consecutive 43rd-place runs for Toyota, dating back to Yeley’s Daytona 500 finish with the same team.
*Yeley is the first driver to finish last in a Cup race at Richmond due to electrical problems. However, in the fall of 1981, Mike Alexander’s #37 Rogers Auto Leasing Buick fell out with wiring problems that kept him from completing a single lap of the 1981 Wrangler Sanfor-Set 400 at Richmond.
*Neither Yeley, nor owner Dusty Whitney, nor the #46 had ever before finished last in a Cup race at Richmond.

LASTCAR CUP SERIES DRIVER’S CHAMPIONSHIP
On Lap 44, Mike Skinner pulled his #60 Big Red Toyota behind the wall, but soon worked out a plan with his crew chief to run some more laps after adjustments. Skinner returned to the track on Lap 68, 24 laps down to the leaders, then called it a night on Lap 85. He finished 41st.

For the second time this year, Michael McDowell was able to run a full race in HP Racing LLC’s #66. This time, the team had primary sponsorship from K-LOVE, a Christian Radio network that funded McDowell’s Nationwide Series effort last year. It was the first time one of Phil Parsons’ Toyotas had a primary sponsor since the 2010 Daytona 500, a race for which McDowell had qualified for by racing his way in through the Gatorade Duels.

On Saturday, the #66 K-LOVE Toyota lost a lap early, but the crew was gaining on the setup when the car started to gradually lose battery power due to a loose alternator wire. The team continued to run the car as long as they could, trying also to rebound from a fueling issue on pit road, until the battery failed on Lap 139. Their car forced behind the wall, the crew diagnosed the battery problem, but struggled with the repairs, and ultimately called it a night on Lap 159. McDowell finished 40th.
1st) Michael McDowell, Joe Nemechek, J.J. Yeley (2)
2nd) Landon Cassill, Kevin Conway, Mike Skinner (1)