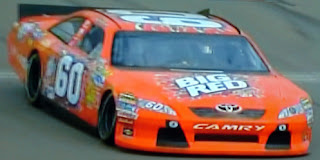 Mike Skinner picked up the 11th last-place finish of his NASCAR Sprint Cup career in Sunday’s Coca-Cola 600 at the Charlotte Motor Speedway when his #60 Big Red Toyota fell out with a vibration after completing 6 of the race’s 402 laps.

Skinner qualified 43rd for Sunday’s race at a speed of 186.774, beating five other “go-or-go-homers” who failed to qualify. Skinner edged Andy Lally for the final spot in the field by 0.019 second. Lally’s speed of 186.651 mph came on his first timed lap before his loose #71 Ford lost control entering turn three the next time by. Despite his rookie status, Lally saved the car from wrecking, sustaining only minor damage to the left-front. Still, Lally left the track with his second DNQ of 2011.

Skinner remained in the rear of the field as the team decided to run a backup car. Six laps into Sunday’s race, Skinner was still running near the tail end of the field when he scraped the wall in turn three. Spotter communications indicated the car did not suffer significant damage, but Skinner was concerned about a vibration the car had developed. After a brief discussion with his crew chief and spotter, Skinner pulled the car behind the wall, ultimately ending their race.

LASTCAR STATISTICS
*It was Skinner’s first last-place finish since last month’s Samsung Mobile 500 at Texas, where he and the #60 team fell out after 36 laps due to a rear gear failure.
*The last time Skinner finished last in a Cup race at Charlotte was in 2006, when his #72 Dutch Quality Stone Chevrolet crashed after the opening lap of the 2006 Bank of America 500.
*The last Cup driver to finish last at Charlotte due to a vibration was Mike Bliss, whose #09 Phoenix Racing Dodge fell out 42 laps into the 2009 Coca-Cola 600.