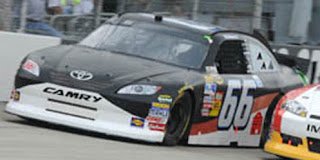 Michael McDowell picked up the 11th last-place finish of his NASCAR Sprint Cup Series career in Sunday’s FedEx 400 Benefitting Autism Speaks at the Dover International Speedway when his unsponsored #66 HP Racing LLC Toyota fell out with electrical problems after 45 of the race’s 400 laps.

Last week at Darlington, McDowell and the HP Racing LLC team decided to leave the Showtime Southern 500 early after an incident with Mike Skinner’s #60 on Lap 5. Crew communications indicated that, even though the damage was not significant and that the team had enough funding to run the whole race, they were planning on running the same car at Dover and did not want to risk it being destroyed. Skinner, running 43rd at the time, then returned to the track several laps down, running just long enough to slip McDowell back to 43rd before he also called it a night.

At Dover, McDowell and the Darlington car returned, though now without the K-Love decals on their black-and-white Toyota. This time, qualifying was rained-out, but since the team was fastest among the “go-or-go-homers” in practice, they secured the 36th spot on the grid. Skinner and the #60 were locked-in as well, lining up 39th on race day.

When the green flag flew, first Joe Nemechek, then Andy Lally slipped to 43rd after Kyle Busch, sent to the rear due to a Friday engine change, drove by them both in the early laps. Lally’s #71 was the first car to lose a lap, earning him the Lucky Dog when Joey Logano’s spin brought out the first yellow on Lap 20. Just before the Lap 24 restart, McDowell fell to the rear of the field and Skinner pulled behind the wall, dropping Skinner to 43rd and Logano to 42nd. McDowell remained on the track through the Lap 41 competition caution, which allowed him to stay out and lead two laps. Only then, just after the restart on Lap 45, McDowell also pulled behind the wall.

Once again, Skinner made another trip out onto the racetrack by Lap 63, at which point his Toyota was more than a dozen laps down. Just like at Darlington, this extra run dropped McDowell to 43rd in the final running order. Skinner pulled out after 51 laps as his car handled so badly that he could barely keep out of the leaders’ path during the long green-flag runs of the race. This inched him past the #30 Inception Motorsports entry of David Stremme, who became NASCAR’s random selection for post-race inspection following his exit after 47 laps. Skinner finished 41st, even though running one more lap would have put him past J.J. Yeley’s #46 for 40th.

LASTCAR STATISTICS
*This was the first time McDowell had ever finished last in a Cup race at Dover. Also, the #66 had never before finished last in any of the previous 82 Sprint Cup races held at the track.
*McDowell is the first Cup last-placer to lead laps since Denny Hamlin led 74 laps, then blew an engine 143 laps into last fall’s Emory Healthcare 500 at Atlanta.