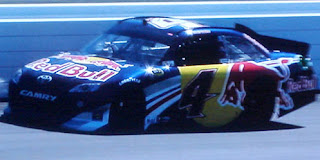 Kasey Kahne finished last in Saturday’s NASCAR Sprint All-Star Race at the Charlotte Motor Speedway when his #4 Red Bull Toyota was involved in a single-car crash after completing 59 of the race’s 100 laps.

Coming off his track record-setting pole and fourth-place finish at Darlington two weeks ago, Kahne was eligible to run the All-Star Race by virtue of his 2008 victory in the event. In qualifying, Kahne’s team put up the 7th-fastest time without receiving any penalties. Though his team did not claim the Pit Crew Challenge on Thursday, Kahne claimed a victory of his own in the Pennzoil Ultra Victory Challenge the afternoon of the main event.

In the race itself, Kahne was able to stay in touch with the leaders at various moments, running up to 4th on Lap 26 after he took a two-tire stop. A second two-tire stop at the end of Segment 1 on Lap 50 moved him up to 2nd behind Carl Edwards, and he held onto the Top 5 after the restart. However, on Lap 59, the run came to an end when Greg Biffle got him loose entering turn one, causing his Toyota to slap the outside wall hard enough to strip off most of the paint on the passenger side.

The wreck put Kahne behind the wall that same lap, making him the first retiree. Brad Keselowski, at the time six laps down due to his own brush with the wall, was then moved up from last. Thanks to being the only car laps down in the closing stages, Keselowski received enough Lucky Dogs to come home one lap behind in 18th.

Carl Edwards, who finished last in the 2010 All-Star Race, went on to win.