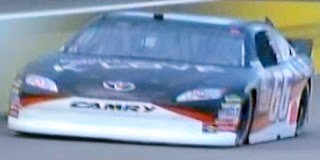 Michael McDowell picked up the 10th last-place finish of his NASCAR Sprint Cup Series career in Saturday’s Showtime Southern 500 at Darlington when his #66 K-LOVE Toyota fell out with a vibration after completing 7 of the race’s 370 laps.

For the second consecutive week, McDowell and the HP Racing LLC team had full sponsorship from Christian radio network K-LOVE, allowing the team to run an entire Cup race for the third time in 2011. In the latter portion of Friday’s “knock-out” qualifying session, McDowell locked the team into the show, picking up two spots on his second timed lap with a speed of 175.353 mph, good enough for 39th on the grid.

At the start of Saturday’s race, McDowell was working his way through the field when disaster struck on Lap 5. Heading down the backstretch, trying to pass Mike Skinner’s #60 Big Red Toyota on the inside, Skinner suddenly turned left, damaging the right-front fender of McDowell’s Toyota. Skinner spun to the apron of the track, bringing out the first caution of the race. As Skinner pulled his virtually undamaged car behind the wall, McDowell’s crew told him to go to the garage as well. Though the crew pointed out the #66 had only minor damage to the fender and a hole in the nose, it was decided to call it a night and save the car for next week’s race at Dover.

Radio communications indicated that McDowell was upset at the early misfortune and was seeking out Mike Skinner to have a heated discussion about the contact. There have been no reports of such a confrontation, however, and Skinner returned to the track 25 laps down later that night. Once Skinner had dropped McDowell to 43rd and moved past Joe Nemechek and David Stremme, two other early exits, Skinner’s Germain Racing team also pulled the plug and he came home in 40th.

LASTCAR CUP SERIES DRIVER’S CHAMPIONSHIP
It was a rough weekend for owner Dusty Whitney, who attempted to enter two cars into Saturday’s race for the first time since last fall at Phoenix. In qualifying, Scott Riggs, driver of the unsponsored second team, #81, had just completed his first timed lap when the engine exploded in turn one. Ultimately, Riggs became the fastest of the three teams to DNQ, having been edged for the 43rd spot by Joe Nemechek. J.J. Yeley and the team’s lead #46 had qualified 31st for Saturday’s race and remained on the lead lap in the early going, only to blow an engine in the exact same spot 34 laps into the race.
1st) Michael McDowell (3)
2nd) Joe Nemechek, J.J. Yeley (2)
3rd) Landon Cassill, Kevin Conway, Mike Skinner (1)