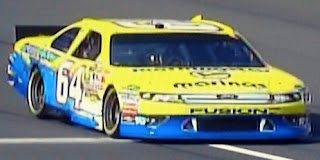 Derrike Cope finished last in Saturday’s Sprint Showdown at the Charlotte Motor Speedway when his #64 Morningstar Marinas Ford was involved in a frightening two-car crash after completing 2 of the race’s 40 laps.

Cope, the all-time leader in NASCAR last-place finishes with 35, had twice attempted to enter a Sprint Cup race this season in his own equipment. Both times, which came at Martinsville and Darlington, Cope was forced to withdraw his #75 when the engine on his car was not turning out enough power. The latest news from Cope’s team has shown promise, however, as he switched manufacturers from Dodge to Chevrolet before the Darlington race and had gained sponsorship funds from Maxellence Energy Drink.

Still unwilling to bring his Chevrolet to Charlotte for the Sprint Showdown, Cope instead accepted an invitation from car owner Larry Gunselman to run his #64 in the race. It would be the first appearance of the #64 since SpeedWeeks at Daytona, during which Cope came up short of racing the Sta-Bil Toyota into the Daytona 500 after a 14th-place run in the second Gatorade Duel. Thanks to a partnership with Front Row Motorsports, Gunselman had also switched manufacturers from Toyota to Ford and had operated Front Row’s #37 team since Bristol with Tony Raines as the driver. Gunselman would also have sponsors for both his cars in the 27-car field, with Black Cat Fireworks and Firehouse Subs for Raines (part of an extended sponsorship deal through the summer) and Morningstar Marinas for Cope.

Cope qualified 25th for the Showdown at a speed of 181.781 mph, starting one row behind Raines, who timed in 23rd. At the start of the race, Cope was holding his own after Raines slapped the wall on the opening lap. Then, as the third lap started, Landon Cassill’s #09 blew a left-rear tire entering turn one, sending him sliding up into traffic. Cope picked the high line, looking to follow David Stremme’s #30, but Cassill’s car closed the hole. With nowhere else to go, Cope slammed into the left-rear of Cassill’s Chevrolet with enough force to lift the #09 off the ground. Though Cope rolled to the apron of turn two and did not drop the window net, both he and Cassill emerged unscathed.

Due to his lower running position on the previous lap than Cassill, Cope was credited with the last-place finish.

LASTCAR STATISTICS
*This is the first time Cope, owner Larry Gunselman, and the #64 have ever finished last in the Sprint Showdown.
*The last thirteen runnings of the Sprint Showdown have now seen thirteen different last-place finishers. 1998 saw the most recent repeat last-placer when Andy Hillenburg’s #95 suffered an oil leak on the opening lap of the 1998 Winston Open, joining his last-place run in 1996 driving Andy Petree’s #33.
*Ford had not finished last in the Sprint Showdown since 2007, when Jon Wood’s #21 Motorcraft Ford was involved in a multi-car crash during the opening lap of the 2007 Nextel Open.