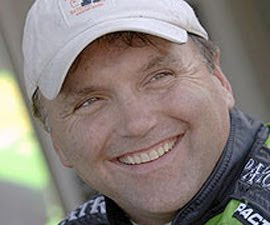 Mike Garvey picked up the 6th last-place finish of his NASCAR Camping World Truck Series career in Friday’s Bully Hill Vineyards 200 at the Nashville Superspeedway when his #38 S&W Services Chevrolet fell out with a loss of oil pressure after 4 of the race’s 150 laps.

With the finish, Garvey now stands tied for 5th in the all-time LASTCAR Truck Series standings, tied with Mike Hurlbert and Butch Miller.

Garvey qualified 35th for the race at a speed of 150.038 mph, besting five other “go-or-go-homers” including Norm Benning, John King, Brian Johnson, Jr., and Jennifer Jo Cobb, who all failed to qualify. This allowed Garvey to make his first start of the 2011 season in a new third team for owner Shane Sieg. Sieg qualified his own #93 in 31st while brother Ryan Sieg timed in 19th in the #39.

However, Garvey’s night did not last long when he went behind the wall during the race’s opening green-flag run. In doing so, Garvey scored his first last-place finish since last fall at Martinsville, the series-leading 4th of his 2010 campaign for the Siegs.

Ryan’s #39 scored the team’s best finish of the night in 21st. Shane’s came home as the first truck a lap down in 26th.

LASTCAR STATISTICS
*This was the first time the #38 had finished last in a Truck Series race since 2009. In that race, the 2009 Ford 200 at Homestead, Garvey himself scored his first-ever last-place finish in the series while driving owner Susan Bates’ #38 S&W Services Chevrolet. An overheating problem knocked him out of the race after 2 laps.
*Neither Garvey nor the #38 had ever before finished last in a Truck Series race at Nashville.