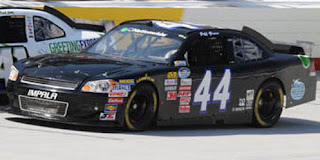 Jeff Green picked up the 17th last-place finish of his NASCAR Nationwide Series career in Friday’s O’Reilly Auto Parts 300 at the Texas Motor Speedway when his unsponsored #44 TriStar Motorsports Chevrolet fell out with a vibration after 2 of the race’s 200 laps.

Green now has 20 last-place finishes across all three of NASCAR’s top divisions, breaking a tie with Todd Bodine, G.C. Spencer, and Darrell Waltrip to rank him 8th all-time. In the Nationwide Series standings, Green remains seven finishes away from tying series leader Jeff Fuller’s mark of 24.

Earlier on Friday, Green qualified 32nd at a speed of 172.035 mph, besting six “go-or-go-homers,” including the #55 of Brett Rowe, the race’s only DNQ. This put Green into his fifth race of the 2011 season, again joining TriStar Motorsports teammates Mike Bliss in the #19 and Eric McClure in the #14. Green and the #44 did not enter the 40-car field at Phoenix in February.

Without sufficient sponsorship for all three cars, owner Mark Smith has again put Green’s #44 on “start-and-park” status, just as when Green drove the team’s #36 to eight last-place finishes in 2010. Thus, in his four previous starts this year, Green has never completed more than 41 laps, resulting in four finishes between 37th and 42nd.

In the Texas race, it first appeared that defending LASTCAR Nationwide Champion Dennis Setzer would score his first last-place finish of 2011. Setzer, driving owner Jay Robinson’s #49, was the first car to go behind the wall during the race’s opening stages. However, soon after Green, Carl Long, Matt Carter, J.J. Yeley (driving Fontana last-place finisher Mike Harmon’s #74), and Kevin Lepage fell out in consecutive laps starting on Lap 3, Setzer returned to the track and passed them all, ultimately falling out in 38th after he completed 13 laps. Only then did Green fall to 43rd.