LASTCAR EXTRA: Michael McDowell Leaves It All On The Track At Martinsville 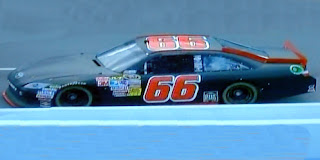 After scoring back-to-back last-place finishes at Bristol and Fontana, Michael McDowell finished 32nd in Sunday’s Goody’s Fast Relief 500 at Martinsville, having been given the opportunity to run a full race for owners Phil Parsons and Randy Humphrey for the first time since the 2010 Daytona 500. Throughout the race, McDowell’s car, still flat black except for decals carrying HP Racing LLC’s web address at http://www.racehp.com/, had an eventful afternoon, running as high as 25th before some late misfortune dropped him seven spots back.

After starting 35th, McDowell lost a lap, scored the first Lucky Dog on Lap 50, then defended his spot on the lead lap by holding off leader Jimmie Johnson just before the second yellow came on Lap 106. McDowell’s spotter aided his defensive driving, though on Lap 87, he replied in frustration, “You know, one time I was a race car driver.” On Lap 125, Marcos Ambrose crossed McDowell’s nose entering turn one. McDowell held his line and shoved Ambrose into the corner, sending the #9 backwards into the outside wall. The incident, and McDowell’s radio communication that he was going to make the most of the race, scored McDowell some TV time during the FOX broadcast:

"I'm not gonna take it, man. This ain't mind games. [sic] They're not messing with me. I got one race a year; I'm gonna make it count."

Despite the handling problems and brake woes that plagued his run, McDowell remained on the lead lap between 25th and 29th for the first 299 laps, never once needing another Lucky Dog to stay there. He traded paint on a number of other occasions, sheetmetal flapping off his smoking left-rear quarter-panel by Lap 187. Following a multi-car accident that occurred just ahead of McDowell on Lap 237, his spotter passed on a message from Greg Biffle’s spotter that “Biffle said ‘Thank you’ ” to which he replied, “For not killing him or for letting him in?”

Soon after on Lap 242, McDowell had another close call when Brad Keselowski sent Paul Menard and Casey Mears spinning in front of him in turn one. McDowell avoided significant damage to his car, had the brake ducts cleared on pit road, and said the plan was “Let’s stay on the lead lap and then go crazy with 75 to go.”

Unfortunately, while running 25th and still on the lead lap on Lap 299, McDowell lost a right-rear tire coming off turn two and slowed, trying to make it onto pit road. When NASCAR failed to throw the yellow, even as Casey Mears’ #13 was also off the pace with damage to the rear end, McDowell was furious: “Why don’t they throw the stinking caution instead of trying to get me run over out here?” He eventually made it to pit road, though apparently his crew didn’t understand his warning about his failing brakes: “What did you not get about ‘I have no brakes, don’t stand in front of me?’ ”

McDowell spent 25 laps behind the wall, during which time the crew discovered some debris was wrapped around the #66's right-rear brake line, choking off the fluid. After the team removed the debris and bled the brakes, McDowell returned to the track with 177 to go. He lost five more laps by race’s end, losing the fifth when he slowed a lap too soon, thinking the white flag was the checkered. This allowed race winner Kevin Harvick to barely nip his accelerating Toyota at the finish line.

As reported last week, HP Racing LLC came into the 2011 season with plans of running only a part-time season. However, with this full-race performance scoring the team’s best finish since Michael Waltrip’s 28th-place run at Talladega last fall, there is no indication as yet if that plan will change.
Posted by Brock Beard at 6:33 PM