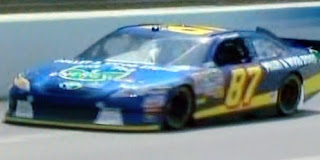 Joe Nemechek picked up the 26th last-place finish of his NASCAR Sprint Cup Series career in Sunday’s Goody’s Fast Relief 500 at the Martinsville Speedway when his #87 AM FM Energy.com Toyota fell out 25 laps into the 500-lap race with brake problems.

With the finish, Nemechek is now tied with Derrike Cope for the second-most last-place finishes in NASCAR Sprint Cup history. It is also Nemechek’s 32nd last-place finish across NASCAR’s top three divisions, tying him for the third-most all-time with the late J.D. McDuffie.

At Martinsville, Nemechek welcomed back returning primary sponsor AM FM Energy.com, who funded his successful bid to make the Daytona 500 in February. He was the fastest “go-or-go-home” car in Friday’s opening practice session (29th overall) and qualified 37th for the race at a speed of 94.209 mph. However, the nose of Nemechek’s #87 was found to be too low in post-qualifying inspection, so the time was disallowed. This dropped Nemechek to 43rd for the start of the race.

No cars were sent home in qualifying as, for the second straight race, only 43 cars attempted to qualify. All-time LASTCAR leader Derrike Cope’s #75 was the first to withdraw prior to practice. Dennis Setzer, returning to K-Automotive’s #92 after the team did not enter the race at Fontana, withdrew after Happy Hour when a brake failure resulted in a turn three crash that destroyed the only car the team had at the track.

Although he appeared to have adequate sponsorship, Nemechek’s was still the first car to go behind the wall on race day, falling out during the opening green-flag run. Mike Skinner in Germain Racing’s #60 fell out six laps later. Radio communications from the #87 indicated Nemechek was considering returning to the track to pass Skinner, but decided not to when he noticed how banged-up the right side of Skinner’s car was after just 31 laps.