TRUCKS: Sweet’s Night At Darlington Is Anything But; Scores First Career Last-Place Finish 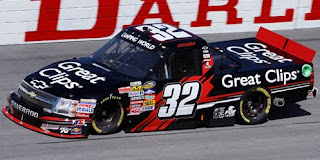 Brad Sweet picked up the 1st last-place finish of his NASCAR Camping World Truck Series career in Saturday night’s Too Tough To Tame 200 at the Darlington Raceway when his #32 Great Clips Chevrolet was involved in a single-truck accident after 13 of the race’s 147 laps. The finish came in Sweet’s 13th series start.

Sweet came into Darlington on the heels of a solid 11th-place finish at Phoenix, his second-best finish in the Truck Series to an 8th at O’Reilly Raceway Park the previous summer. Driving for the newly-reorganized Turner Motorsports team, which scored a surprising Nationwide Series win with Mark Martin at Las Vegas the week before, Sweet arrived at Darlington 11th in the Truck Series standings.

Sweet qualified 21st at a speed of 169.836 mph, but like Kvapil at Phoenix, was sent to the rear due to unapproved post-qualifying adjustments to his truck. Although a quick move to the apron kept him from being involved in a grinding seven-truck accident on the opening lap, he was not so fortunate on Lap 14 when his truck slammed into the Turn 3 wall. The damage to Sweet’s truck was enough to knock him out of the race, dropping him to 36th in the final running order after all seven trucks involved in the Lap 1 melee returned to the track.

LASTCAR STATISTICS
*The #32 had not finished last in a Truck Series race since 2001, when Jerry Miller’s Miller Brothers / Siebert Service Dodge lost its engine after the opening lap of the 2001 Chevy Silverado 200 at Nazareth, the last Truck race held at that track. The #32 has never before finished last in a Truck race at Darlington.
*If another driver scores their first career last-place finish in the Truck Series during the next race at Martinsville, it will mark the second-straight year that there has been three consecutive first-time last-placers in the series. Last spring, G.R. Smith, Narain Karthikeyan, and Chris Lafferty scored their first 36th-place runs in the races at Nashville, Kansas, and Dover, respectively. Lafferty failed to qualify for Saturday’s race as the slowest “go-or-go-homer.”