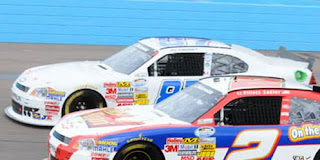 Kevin Conway picked up the 3rd last-place finish of his NASCAR Nationwide Series career in Saturday’s Sam’s Town 300 at the Las Vegas Motor Speedway when his unsponsored #87 NEMCO Motorsports Chevrolet fell out with overheating problems after completing 2 of the race’s 200 laps.

The Vegas weekend proved difficult for the NEMCO’s Nationwide Series team. Team owner Joe Nemechek wrecked his #87 in practice, sending his crew scrambling to get the backup car ready for the next day’s race. Conway, who was then driving the team’s second car, #97, also struggled in practice, and he called upon Nemechek to take a turn practicing the #97 while the backup #87 was prepared.

With the benefit of this additional track time, the decision was made to have Nemechek drive Conway’s car in the race while Conway would turn a few laps, then park the backup #87. Unfortunately, inspection procedures prohibited Nemechek from switching car numbers, and Conway’s run would thus count against the #87's ranking in Owner Points.

Conway did not take a lap in qualifying and relied on the #87 team’s Owner Points to make the show. With the late addition of Charles Lewandoski’s #03, a backup Robert Richardson-owned Dodge, all 43 cars who entered the race made the show. Lewandoski’s car was such a late arrival to the race that, in Friday’s practice, only the door numbers were changed from “23” to “03” and Richardson’s name was still on the roof.

In the race itself, Conway and defending LASTCAR Nationwide Driver’s Champion Jeff Green followed each other to the garage after two laps. Lewandoski followed four laps later during the first caution period of the race. Nemechek’s run in the #97 netted him a 23rd-place finish, one spot behind Robert Richardson, Jr. in his primary #23.

LASTCAR STATISTICS
*All three of Conway’s last-place finishes have come in the Nationwide Series. The first came in the 2006 Sharpie Mini 300 at Bristol, where his Scott Glynn-owned #58 Dodge was involved in a crash on Lap 6. His most recent finish came the next year at Richmond, where his Joe Gibbs-owned #18 Z-Line Designs / Circuit City Chevrolet crashed 36 laps into the 2007 Emerson Radio 250.
*NEMCO’s flagship #87 had not finished last in a Nationwide Series race since 2003, when none other than Kyle Busch’s Chevrolet lost an engine 2 laps into the 2003 Aaron’s 312 at Atlanta after qualifying 9th. It was the first and, so far, only last-place finish Busch has scored in 205 Nationwide Series starts.
*NEMCO’s Nationwide team has not finished last at Las Vegas since 2004, when Jeff Fuller’s #88 overheated 34 laps into the 2004 Sam’s Town 300, scene of the second of Fuller’s record-setting 11 last-place finishes he scored that season.