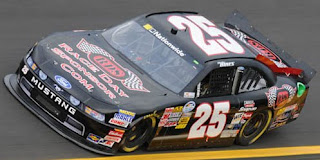 Kelly Bires picked up the 2nd last-place finish of his NASCAR Nationwide Series career in Saturday’s Scotts EZ Seed 300 at the Bristol Motor Speedway when his unsponsored #25 Team Rensi Motorsports Ford fell out with handling problems after completing 2 of the race’s 300 laps.

Bires qualified 33rd for the race at a speed of 121.282 mph, more than enough to make Chris Lawson’s #03 the only car to miss the show. Two laps into the race, Bires and his underfunded Ed Rensi-owned Ford were behind the wall. However, Bires did not climb from his car as the race’s last-place finisher. Instead, 43rd belonged to 2nd Chance Motorsports’ #79, an unsponsored red Ford sitting idle and without its driver in the garage area. The car had yet to start the race.

As has been reported throughout the weekend, the #79 is owned by Bill Russell, who, in a controversial series of events, caused driver Jennifer Jo Cobb to leave the team just minutes before the green flag of the 300-lapper.

Cobb, hired by Russell to drive the car for the first five races of 2011, successfully rebounded from a Daytona DNQ by making each of the next three races and showed measured improvement in each. Bristol was to be the fourth race of her contract, leading to the fifth next week at Fontana. Aware that the team had limited financing, Cobb obeyed Russell and drove conservatively at Bristol, qualifying 41st on the grid. She aided Russell by obtaining funding for tires and worked with her crew chief in assembling pit crew members. Though staunchly opposed to the “start-and-park” practice underfunded NASCAR teams have used in recent years, Cobb even agreed to obey Russell in parking the car at Bristol so long as she were allowed to race the full distance at Fontana.

Russell responded by breaking his contract with Cobb, saying that she would not be driving for him at Fontana, but that she was still expected to park the car for him at Bristol. Disgusted, Cobb refused and climbed out of the car.

The team pushed the car behind the wall and picked up Chris Lawson, who was still on the track premises following his DNQ that morning. The crew spent an unusually long time - nearly half the race - adjusting the car so Lawson could run just four laps around the half-mile track, at last moving Bires to last place and Brad Teague to 42nd. Although just four more laps would have easily moved the #79 up two more spots, Russell had the car parked, leaving them 41st.