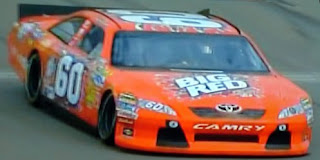 Landon Cassill picked up the 2nd last-place finish of his NASCAR Sprint Cup career in Sunday’s Kobalt Tools 400 at the Las Vegas Motor Speedway when his #60 Big Red Toyota fell out with rear gear problems after completing 34 of the race’s 267 laps.

Cassill’s qualifying prowess, practiced constantly through iRacing simulations, secured him his first 16 Sprint Cup starts last year for Phoenix Racing, Larry Gunselman Racing, and TRG Motorsports with a best finish of 33rd at Richmond last fall. This year, Cassill drives for Germain Racing’s new second team, joining Casey Mears’ #13 GEICO Toyota. After the new #60 team missed the Daytona 500 when then-driver Todd Bodine was swept up in a late-race crash in the Gatorade Duels, Cassill overcame an engine failure in practice to make the race at Phoenix, then qualified 36th for the Las Vegas race at a speed of 182.070 mph.

However, although the #60 team has secured sponsorship from Big Red and All-Sport, once the sponsors for Jeremy Mayfield’s owner-driver operation in 2009, the team has not yet completed a full race. At Phoenix, Cassill was forced behind the wall after 68 laps with brake failure. This week, the 21-year-old driver was behind the wall after 34 laps with rear gear failure.

With two races left until the 2011 Owner Points set the 35 drivers locked-into each week’s race, the #60 team currently sits 43rd in points, 38 markers behind 35th, currently held by his teammate Mears.

LASTCAR CUP SERIES DRIVER’S CHAMPIONSHIP
Michael McDowell and last week’s last-place finisher Joe Nemechek were the first to actually go behind the wall during Sunday’s race at Las Vegas, but both returned to the track after Cassill retired to complete a handful more laps, moving them up to 41st and 42nd. One day after NEMCO’s Nationwide team finished last with Kevin Conway, the two laps Nemechek completed narrowly averted a rare weekend sweep.

The last time a team (and driver) finished last in both a Cup and Nationwide Series race in the same weekend was in the fall of 2009, when Dave Blaney pulled it off at Atlanta. At the time, both Blaney’s #66 PRISM Motorsports Toyota and #91 MSRP Motorsports Chevrolet were owned by Phil Parsons.
1st) Landon Cassill, Joe Nemechek, J.J. Yeley (1)