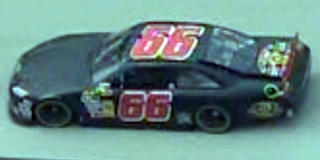 Michael McDowell picked up the 8th last-place finish of his NASCAR Sprint Cup career in Sunday’s Jeff Byrd 500 at the Bristol Motor Speedway when his unsponsored #66 HP Racing LLC Toyota fell out with brake problems after completing 35 of the race’s 500 laps.

Formerly known as PRISM Motorsports, the #66 team, owned by Phil Parsons and Randy Humphrey, downsized into a single-car part-time team over the off-season. So far, the team has attempted all of the season’s first four races with 2010 driver Michael McDowell as its driver. Although an engine failure in the Gatorade Duels prevented McDowell from racing the car into his 2nd straight Daytona 500, driver and team have made all three races since.

McDowell qualified 39th for Sunday’s race at a speed of 123.994 mph. In the opening stages of the race, Dennis Setzer, making his first Cup start since Martinsville in the fall of 1998, was the first to fall to 43rd and the first to be lapped. Following a multi-car accident on Lap 27, Brian Vickers sustained the most serious damage of those involved and fell to last place during 51 laps of repairs behind the wall.

Although FOX indicated that McDowell was set to run the whole race at Bristol, he was behind the wall by the time Vickers returned to the track, followed by Landon Cassill and Joe Nemechek, the two drivers who scored the two most recent last-place finishes in Cup at Phoenix and Las Vegas. Though all three listed brake failure as the reason they fell out, the FOX commentators also reported McDowell’s engine sounding sick before he pulled out of the race.

Over the radio on Lap 44, just prior to his exit, Landon Cassill also suggested putting all the brake blowers on his #60 at Martinsville, saying it would best prepare the team to run a full race sometime down the road. He acknowledged, however, that the team will still “start-and-park” at Martinsville, absent a change in circumstances.

LASTCAR STATISTICS
*This is McDowell’s second-straight last-place finish at Bristol, both of which coming while he drove for HP Racing LLC / PRISM Motorsports. McDowell ran PRISM’s now-defunct #55 team to a 43rd-place run 16 laps into last August’s Irwin Tools Night Race.
*This is HP Racing LLC / PRISM Motorsports’ fourth last-place finish in the last five Cup races at Bristol, joining Dave Blaney’s sweep of both 2009 races in the #66 and McDowell’s run in the #55 last August.
*A Cup driver had not finished last at Bristol due to brake problems since 2004, when Andy Hillenburg’s Stan Hover-owned #80 Commercial Truck & Trailer Ford fell out 4 laps into the 2004 Food City 500.

LASTCAR CUP SERIES DRIVER’S CHAMPIONSHIP
Like Cassill and Nemechek, Daytona 500 last-placer J.J. Yeley fell out of Sunday’s race with brake failure after 97 laps, leaving him 40th. Though still without primary sponsorship, Yeley’s team found speed earlier in the week. His #46 was fastest among the “go-or-go-homers” in the opening practice and in Happy Hour, where he was 15th overall.
1st) Landon Cassill, Michael McDowell, Joe Nemechek, J.J. Yeley (1)