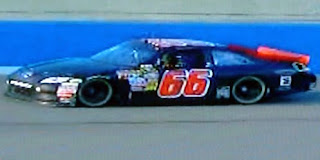 Michael McDowell picked up the 9th last-place finish of his NASCAR Sprint Cup Series career in Sunday’s Auto Club 400 at the Auto Club Speedway of Southern California (Fontana) when his unsponsored #66 HP Racing LLC Toyota fell out with an electrical problem after completing 32 of the race’s 200 laps.

McDowell qualified 33rd for Sunday’s race at a speed of 180.605 mph and was the fastest of the “go-or-go-homers” in Happy Hour, 31st overall.

Early in the race itself, it first appeared Tony Raines would finish 43rd when the engine on his unsponsored #37 caught fire six laps into the race. Repairs were made, however, and he returned to the track to ultimately finish 10 laps down in 36th. Next, Todd Bodine, making his first start for Germain Racing’s #60 team since the Gatorade Duels, went behind the wall after he lost a lap on Lap 18. Bodine was followed quickly by Joe Nemechek’s #87 on Lap 29 and McDowell on Lap 33. This allowed Bodine to take 43rd from Tony Raines.

Though this put McDowell in 41st, first Nemechek and then Bodine also returned to the track just long enough to shuffle McDowell to 43rd by the time the first caution waved for debris on Lap 74. Radio communications confirmed that HP Racing LLC did not intend to have McDowell follow Nemechek and Bodine back onto the track. On Lap 44, the #66 crew acknowledged their car would be NASCAR’s random selection for post-race inspection. Around Lap 54, the crew also discovered a hole in the radiator of their Toyota which had gone undetected up to that point.

HP Racing LLC entered 2011 with plans of running a part-time season. With the fifth race of the season completed and the #66 now ranked 44th in Owner Points, 58 markers outside the Top 35, there is no indication as of this writing which races the team may skip.

LASTCAR CUP SERIES DRIVER’S CHAMPIONSHIP
On Lap 35, soon after McDowell retired, J.J. Yeley stayed out to lead two laps in Dusty Whitney’s #46 Red Line Oil Chevrolet, then went behind the wall when he ran out of fuel. Soon after, his radio traffic indicated they knew Bodine and Nemechek would return to the track, so Yeley returned as well. A second trip to the garage prevented Yeley stopped him three laps short of outlasting Bodine, who retired on Lap 94, but he still held off Nemechek for 41st.
1st) Michael McDowell (2)
2nd) Landon Cassill, Joe Nemechek, J.J. Yeley (1)