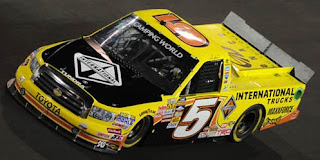 Travis Kvapil picked up the 1st last-place finish of his NASCAR Camping World Truck Series career in Friday’s Lucas Oil 150 at the Phoenix International Raceway when his #5 International Truck / Monaco RVs Toyota was involved in a single-truck accident after completing 99 of the race’s 150 laps. For Kvapil, the 2003 series champion, the finish came in his 134th series start.

Kvapil struggled tremendously during Daytona SpeedWeeks, having crashed out of both the Truck Series opener and the Daytona 500. Still, after Steve Wallace and the #77 team chose not to run at Phoenix after the team’s 20th-place finish in the Daytona 500, Kvapil no longer had to worry about qualifying: he was now locked-into both the Truck and Cup races based on Owner Points. In qualifying for the Truck race, Kvapil had to rely on these points as his 125.056 mph lap was only good enough for 33rd on the grid.

The poor performance in qualifying forced the Randy Moss-owned team to make post-qualifying adjustments for an impound race, forcing Kvapil to start in the rear of the field. While fighting to keep up the pace on Lap 59, he cut a tire and spun in turn two, bringing out the second caution of the race. Now down a lap to the leaders, Kvapil’s night took a turn for the worse on Lap 102 with a crash in turn three.

LASTCAR STATISTICS
*The #5 had not finished last in a Truck Series race since 1997, when Robbie Pyle’s Central Fastener Dodge lost its transmission 13 laps into the 1997 Link-Belt Construction Equipment 225 at Louisville.
*Kvapil has two other last-place finishes in NASCAR competition, but both of them came in the NASCAR Sprint Cup Series: an engine failure 13 laps into the 2005 USG Sheetrock 400 at Chicagoland while driving Doug Bawel’s #77 Kodak Dodge and a brake failure on Bob Jenkins’ #37 Long John Silver’s Dodge 30 laps into the 2009 Tums Fast Relief 500 at Martinsville.