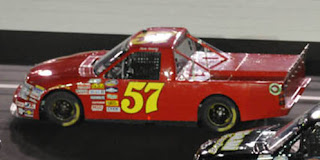 Norm Benning picked up the 4th last-place finish of his NASCAR Camping World Truck Series career in Friday night’s NextEra Energy Resources 250 at the Daytona International Speedway when his unsponsored #57 Norm Benning Racing Chevrolet fell out with an engine failure after completing 22 of the race’s 103 laps.

For the third straight year, Benning attempted to qualify for both the Sprint Cup and Truck Series openers at Daytona. However, since he was unable to participate in any of the first four Cup practice sessions, he was forced to withdraw his #57 Chevrolet. This turned the ARCA veteran’s attention to Friday’s truck race.

Benning and his #57 truck qualified 32nd in the 36-truck field at a speed of 169.952 mph, having been locked-into the field based on his ranking in 2010's final Owner Points. Unfortunately, during the race itself, Benning was forced to make several green flag stops in the opening 22 laps before he finally pulled behind the wall for good with engine trouble.

LASTCAR STATISTICS
*The race marked Benning’s first last-place finish in the Truck Series in nearly two years, dating back to when his #57 Germaine Tooling Group Chevrolet fell out of the 2009 WinStar World Casino 400 at Texas after three laps due to handling woes.
*Neither Benning, nor the #57, had ever finished last in a Truck Series race at Daytona.
*It was Chevrolet’s seventh last-place finish in the Truck Series race at Daytona and second in a row. A Chevrolet truck has still yet to win at the track.