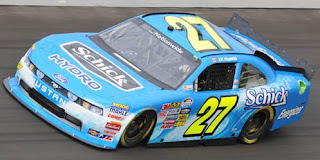 Justin Marks picked up the 2nd last-place finish of his NASCAR Nationwide Series career in Saturday’s Bashas’ Supermarkets 200 at the Phoenix International Raceway when his unsponsored #27 Baker Curb Racing Ford fell out with brake problems after completing 7 of the race’s 200 laps.

Marks qualified 36th at a speed of 124.236 mph, but was guaranteed a spot in the race as only 40 cars entered the race. It was the series’ first short field since the 42-car 2008 Stater Brothers 300 at the Auto Club Speedway of Southern California. In the race itself, Marks was the first to go behind the wall during the opening green-flag run. All of the Bottom Five finishers fell out within the first 19 laps.

LASTCAR STATISTICS
*Ford had not finished last in back-to-back Nationwide races since 2004, when Mark Green and Jimmy Kitchens finished 43rd in Jay Robinson’s #28 Fords in the Funai 250 at Richmond and the final Nationwide race at Nazareth, the Gould’s Pumps / ITT Industries 200.
*For Marks and Baker-Curb Racing, their most recent last-place finishes all came last season. Driver and team’s came last summer in the 2010 Napa Auto Parts 200 at Montreal’s Circuit Gilles Villeneuve. Marks’ rear gear failed on his #43 Future Electronics Ford during the opening lap.
*It was the first last-place finish for the #27 in Nationwide since the 2010 Subway Jalapeno 250 at Daytona, the first race for the series’ new-model car. That night, driver Jennifer Jo Cobb’s #27 DriverBoutique.com Ford was involved in a two-car accident with her then-teammate Johnny Chapman at Baker-Curb Racing.
*The #27 had never before finished last in a Nationwide race at Phoenix.
*It was just the 4th time in 19 total races that Ford finished last in a Nationwide Series race at Phoenix.