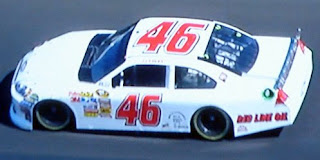 J.J. Yeley picked up the 3rd last-place finish of his NASCAR Sprint Cup Series career in Sunday’s 53rd Annual Daytona 500 at the Daytona International Speedway when his #46 AAMCO Transmissions / Red Line Oil Chevrolet lost its engine after completing 22 of the race’s 208 laps.

In 2010, Yeley returned from injuries suffered in a dirt track race to take over departing driver Terry Cook’s driving duties in Whitney Motorsports’ #46. When Yeley joined the team in May, Cook and team had qualified for just three of the season’s first ten races. Cook nearly raced his way into the Daytona 500 that year, but was knocked-out by a mid-race spin while running near the Final Transfer Spot. Despite a continued lack of sponsorship, Yeley helped turn the team around, qualifying on speed for his first eight consecutive races with Whitney. The highlight of the season came in his return trip to Daytona in July, where he finished a season-best 19th.

As the summer of 2010 ended, however, Yeley’s qualifying performances faltered, resulting in a string of DNQs. In September, Whitney replaced Yeley with Michael McDowell and changed manufacturers from Chevrolet to Dodge. Yeley eventually rejoined the team to run the team’s old Dodges, numbered #81, and qualified them into two more races at Dover and Martinsville. After McDowell himself struggled in the final weeks of the season, Yeley re-signed with the team to run its #46 Chevrolet at Daytona.

Last week, Yeley struggled in Sunday’s qualifying session, forcing him to race his way into the Daytona 500 field from the next-to-last starting spot in the 24-car Race 1 of the Gatorade Duels. For much of that race on Thursday, Kevin Conway held the Final Transfer Spot with drafting help from teammate and defending LASTCAR Cup Driver’s Champion Joe Nemechek. Without a teammate of his own, Yeley lost a lap in the closing stages, but scored the final Lucky Dog of the afternoon when, curiously, Michael McDowell blew his engine in HP Racing’s #66 Toyota (a team that was formerly LASTCAR 2010 Owner’s Champion runner-ups PRISM Motorsports). This allowed Yeley to pit for fresh tires and fuel for the final green-white-checkered finish. In those final two laps, Yeley muscled his way past Conway and Nemechek, fighting to break their two-car draft and bump his way in. The effort succeeded, much to Nemechek’s dismay, as Yeley finished one spot ahead of Conway in 17th. All this was done with an engine the team acquired just two weeks before the Duels.

Having raced his way into the 33rd spot of the Daytona 500 field, Yeley acquired additional sponsorship from both AAMCO Transmissions and returning sponsor Red Line Oil, who funded McDowell’s late-season run for Whitney in 2010. Prior to that, the #46 carried only limited sponsorship from Red Line Oil in qualifying and a little more from International Trucking, another 2010 sponsor, in the Duels. Now with sufficient funding to run the entire race on Sunday, Yeley was ready to race and build on his 19th-place finish there the previous July.

Unfortunately, the run did not last long. On Lap 11, while running in the middle of a thick knot of traffic on the backstretch, Yeley’s #46 suddenly erupted in smoke as the engine let go, bringing out the second caution of the race. No other car was involved in the incident, and the damage sustained to the engine proved terminal.

Just over ten laps later, Kevin Harvick’s engine exploded off turn two, ultimately ending his race with a 42nd-place finish. Yeley’s engine failure was all that kept Harvick from scoring his first last-place finish in any of his combined 730 Cup, Nationwide, and Truck Series starts.

LASTCAR STATISTICS
*This was Yeley’s first last-place finish in Cup since last fall at Charlotte, where he fell out with ignition problems after 73 laps while driving owner Tommy Baldwin’s #36 Chevrolet in the 2010 Bank of America 500.
*Dusty Whitney’s #46 most recently finished last in last fall’s Sylvania 300 at New Hampshire, where Michael McDowell fell out with engine failure after 29 laps.
*This was the first time the #46 had finished last in the Daytona 500 since the 1997 running, where Wally Dallenbach, Jr.’s First Union Chevrolet lost the engine after 32 laps.
*Chevrolet has now finished last in 16 of 53 Daytona 500s. The late Coo Coo Marlin’s 1965 Chevy #04 was the first in 1967.

LASTCAR CUP SERIES DRIVER’S CHAMPIONSHIP
Defending LASTCAR Driver’s Champion Joe Nemechek was locked-into Sunday’s field on his qualifying speed for the second time in as many years, granting him the 41st starting spot. Though Nemechek, like Yeley, had acquired full sponsorship to run the entire race, his luck was equally terrible. Trapped in the high groove when the massive Lap 29 wreck unfolded in Turn 3, Nemechek’s #87 was left severely damaged, leaving him 39th in the running order.
1st) J.J. Yeley (1)