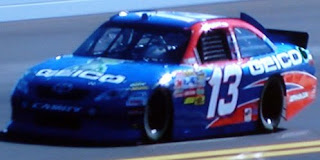 Casey Mears finished last in Thursday’s Gatorade Duel Race 2 at the Daytona International Speedway when his #13 GEICO Toyota lost the engine after 2 of the race’s 60 laps.

The journeyman driver signed on with Germain Racing’s #13 team last summer to replace Max Papis, who turned his focus to the Camping World Truck Series. Mears had started the 2010 season with Keyed-Up Motorsports, a start-up team with which he narrowly missed the field for the Daytona 500 after a competitive run. Four more DNQs later, Mears and Keyed-Up separated, and he spent the rest of the year between Tommy Baldwin Racing, Team Red Bull, and as a standby relief driver for an injured Denny Hamlin.

With Germain Racing, Mears found needed stability and authored some steady runs in the final part of the season with a season-best finish of 21st at Richmond in September. Though the team remained outside the Top 35 and would thus have to race into the Daytona 500, Mears was ready to make his first 500 start in two years.

Unfortunately, Mears’ optimism was short-lived. A blown engine in the late stages of Wednesday’s final practice before the Duels left the team scrambling to make a quick engine change. Unable to make the change in time, Mears would not only have to surrender his 17th starting spot and start in the rear for Thursday’s qualifier, but would have to do so with an engine that hadn’t seen a lap on the racetrack. The results proved disastrous: just two laps into the race, Mears’ backup engine exploded on the backstretch in a huge plume of smoke.

Mears was visibly dejected, sitting on the edge of the driver’s side window after he climbed out in the garage. It was his second-straight DNQ for the Daytona 500.

LASTCAR STATISTICS
*This marked the third time the #13 had finished last in either of the Gatorade Duels. Curtis Turner was the first when he quit one lap into 1967's Race 1 and, most recently, Greg Sacks’ Dodge crashed two laps into 2005's Gatorade Duel Race 2.
*Mears’ was just the second Toyota to finish last in a Gatorade Duel, joining Jeff Fuller, whose #97 FrontRowJoe.com Toyota was the first to fall out of last February’s Race 1.
*It was Mears’ first-ever last-place finish in the Gatorade Duels. He has three other last-place finishes in NASCAR points races.