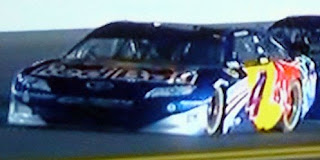 Kasey Kahne finished last in Saturday night’s Budweiser Shootout at the Daytona International Speedway when his #4 Red Bull Toyota lost the engine after completing 7 of the race’s 75 laps.

Kahne had achieved modest success in Team Red Bull’s Toyotas last fall, running the last five races in relief of Brian Vickers and scoring the pole at Homestead. Vickers returned as Kahne’s teammate this year and, in preseason testing, the two were among the fastest to speed around Daytona’s new pavement.

On Friday night, Kahne drew the 5th starting spot in the 24-car field, giving the Washington driver excellent track position. Just two laps into the race, he vaulted to the lead with an assist from Clint Bowyer in a swift two-car draft. Still among the leaders seven laps into the race, Kahne’s Toyota suddenly sputtered on the backstretch and coasted onto pit road. The crew looked under the hood, then pushed car #4 behind the wall.

Besides Kahne, nine other drivers retired from the race, all from the result of accidents. Three-time LASTCAR Cup Champion Derrike Cope, who finished last in the 2010 Shootout, finished two laps down in 14th as the final car to cross the finish line.