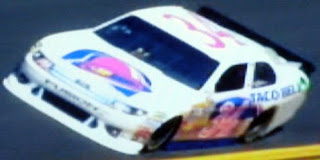 David Gilliland finished last in Thursday’s Gatorade Duel Race 1 at the Daytona International Speedway when his #34 Taco Bell Ford fell out with electrical problems after completing 40 of the race’s 62 laps.

Gilliland, the 2007 Daytona 500 polesitter, started 21st in the 150-mile qualifier, but was already locked-into the Daytona 500 field based on 2010 Owner Points. Gilliland and his Front Row Motorsports teammates switched rides on several occasions last year, allowing for two of the FRM teams (#34, #37) to finish in the Top 35. Once Travis Kvapil’s #38 became the third-fastest car in Sunday’s qualifying, locking him in on speed, this meant all three teams were guaranteed starting spots in the 500 for the second straight year.

However, in the 24-car qualifying race itself, Gilliland was the only Front Row car in the field; Kvapil and Richardson ran in Race 2. Without a drafting partner as the two-car draft strategy reigned supreme, Gilliland remained near the back of the field for most of the race. Then, near the two-thirds mark, a faulty spark plug forced him to make an unscheduled stop under green. With so little of the race to go, the decision was made to park the car for the rest of the event.