CUP: After Phoenix Troubles, Nemechek One Finish Away From Tying Cope For Second-Most Lasts in Cup History 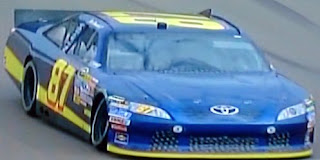 Joe Nemechek picked up the 25th last-place finish of his NASCAR Sprint Cup Series career in Sunday’s Subway Fresh Fit 500 at the Phoenix International Raceway when his unsponsored #87 NEMCO Motorsports Toyota fell out with electrical problems after completing 22 of the race’s 312 laps.

Last week, Nemechek’s #87 was the fastest Toyota in the Daytona 500's prestigious qualifying session - 21st overall - and had secured sufficient sponsorship from AM/FM Energy to run the entire race. Unfortunately, he was one of the unlucky drivers involved in the grinding multi-car accident on Lap 29, leaving him with a 39th-place finish.

Without sponsorship at Phoenix, Nemechek was unable to run all 312 laps. He qualified 32nd for the race at a speed of 134.933 mph, more than enough to bump Brian Keselowski’s own unsponsored machine out of the race, and ran up to the first debris caution on Lap 21 before he pulled behind the wall.

LASTCAR STATISTICS
*With the finish, Nemechek is one finish away from tying Derrike Cope for the second-most last-place finishes in NASCAR Sprint Cup history. By scoring one more last-place finish, he will also tie the late J.D. McDuffie for the third-most all time (32).
*Nemechek’s most recent Cup last-place finish came last year in the 2010 AAA Texas 500 at the Texas Motor Speedway, where his unsponsored #87 retired with engine woes after 12 laps. It was his 7th last-place finish of the 2010 Cup season, part of his second LASTCAR Cup Driver’s Championship.
*Neither Nemechek, nor a car #87, had ever before finished last in a Cup race at Phoenix.

LASTCAR CUP SERIES DRIVER’S CHAMPIONSHIP
Daytona 500 last-place finisher J.J. Yeley welcomed back returning sponsor AAMCO Transmissions from SpeedWeeks and was ready to race in front of his home-state fans in Arizona. Unfortunately, Yeley was forced to make several green-flag stops where the crew worked under the hood until an electrical failure took his #46 out of the race after 72 laps. He finished 37th.
1st) Joe Nemechek, J.J. Yeley (1)