TRUCKS: Sieg Claims 2010 Owner’s Title For His #93 Team After Early Exit at Homestead 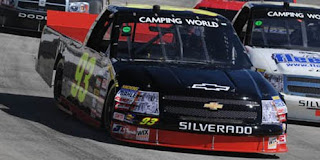 Shane Sieg picked up the 3rd last-place finish of his NASCAR Camping World Truck Series career in Friday’s Ford 200 at the Homestead-Miami Speedway when his #93 S&W Towing Chevrolet fell out with electrical problems after completing 8 of the race’s 134 laps.

In doing so, Sieg claimed the 2010 LASTCAR Owner’s Championship for his #93 team by tying Team Gill Racing’s #95 with six finishes apiece, breaking the tie with 18 bottom-five finishes to Gill’s 11. Part-time driver Mike Garvey clinched the Driver’s Championship at Texas, two races ago.

Garvey was initially listed as driver of the #93 at Homestead, but it was Sieg who qualified the truck 33rd in the field at a speed of 159.419 mph. Team Gill Racing never entered its #95. During the opening green flag run, Sieg pulled behind the wall as one of only three trucks that failed to finish the race. 35th-place Mario Gosselin lost the engine after 45 laps while Talladega last-placer John Jackson, in Gosselin’s team truck, was involved in a very hard crash at pit entrance on Lap 112.

TRUCK STATS AND FACTS
*The finish was Sieg’s second of the 2010 season, joining his 36th-place run in the Kroger 250 at Martinsville back in April. That race, where Sieg went behind the wall after 3 laps in the #93, was also the last time a Truck Series last-placer fell out with electrical problems.
*This marked the third straight year that Chevrolet finished last in the Truck Series finale at Homestead, joining Mike Garvey and Kevin Lepage.
*The #93 had never before finished last in a Truck Series race at Homestead.

LAPS COMPLETED STATS
*Just three Truck Series last-placers completed more than 9 laps in the 2010 season: G.R. Smith at Nashville (27 laps), Jason White at Bristol (28) and Mike Garvey at Martinsville (27). Omitting these three, the average last-place finisher has completed 3.91 laps. When all 25 are considered, the Truck Series last-placers of 2010 have combined to complete 168 of the season’s 3884 laps, roughly 4.3% of the season total.