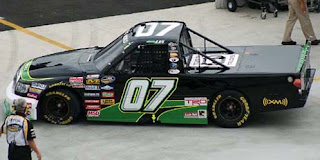 Butch Miller picked up the 6th last-place finish of his NASCAR Camping World Truck Series career in Friday’s Lucas Oil 150 at the Phoenix International Raceway when his #07 ASI Limited Toyota fell out with an axle problem after completing 8 of the race’s 150 laps.

Owner Ken Smith’s #07 has qualified for all 24 races run so far in the 2010 season, switching between drivers Sean Murphy, Donny Lia, Tony Jackson, Jr., John King, and Miller. Despite the team’s frequent driver changes and switching manufacturers between Chevrolet, Dodge, and Toyota, the team has scored three top-15 finishes with a best of 13th at Daytona and Michigan. Like other underfunded organizations, however, the team has had to park its trucks early during the latter part of the season, most often with Miller behind the wheel.

Miller qualified 30th for Friday’s race at a speed of 126.280 mph. With 36 trucks on the entry list for as many starting spots, no drivers were sent home after qualifying. However, eight laps into the race, he was already behind the wall. Last-place starter Chris Lafferty and his #89 followed six laps later when his Chevrolet pounded the turn four wall on Lap 17.

TRUCK STATS AND FACTS
*It was Miller’s first last-place finish in the Truck Series since 2008, when his #0 ASI Limited Chevrolet also finished last at Phoenix after a grinding multi-truck wreck occurred on the opening lap of the 2008 Lucas Oil 150. All five of Miller’s previous last-place finishes in the Truck Series came during that same season.
*The #07 had not finished last in a Truck Series race since 2005, when Jack Bailey’s City of Cincinnati Chevrolet was taken in out in a crash after 2 laps of the 2005 Silverado 350K at Texas.
*No truck had finished last because of an axle failure since 2009, when Brandon Knupp’s #08 Tiwi Chevrolet fell out 5 laps into the 2009 Heluva Good! 200 at New Hampshire.

LASTCAR TRUCK SERIES OWNER’S TITLE IN GARVEY’S HANDS AT HOMESTEAD
As reported last week, Team Gill Racing’s #95 did not enter the Phoenix race and was thus unable to clinch the 2010 LASTCAR Truck Series Owner’s Championship. The second-ranked #93 team, driven for most of this season by 2010 LASTCAR Driver’s Champion Mike Garvey, was raced by owner Shane Sieg to a 33rd-place finish.