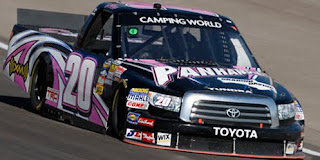 Johanna Long picked up the 2nd last-place finish of her NASCAR Camping World Truck Series career in Friday’s Winstar World Casino 350K at the Texas Motor Speedway when her #20 Panhandle Grading and Paving Toyota was involved in a two-truck accident on lap 2 of the 147-lap race.

Long qualified 9th for Friday’s race at a speed of 178.897 mph, earning her first top-10 run in just her sixth series start. Her speed was also fastest among those teams not locked-into Friday’s field, besting 13th-place Parker Kligerman in the Brad Keselowski-owned #29.

Unfortunately, when the race began, Long either missed a shift or spun the tires, stacking up the inside line behind her. Exiting the quad-oval, Ricky Carmichael dove through the grass to pass her and the two trucks made contact, cutting down Long’s left-rear tire. After wrestling her truck around the track, Long lost control in turn four and backed into the outside wall, ending her night. Justin Lofton also suffered damage in the wreck after he checked-up for the caution flag.

2010 LASTCAR TRUCK SERIES DRIVER’S CHAMPION: MIKE GARVEY
With just two races left this season, Mike Garvey retains his two-finish lead in the Driver’s Standings and has thus officially clinched the 2010 LASTCAR Truck Series Driver’s Championship. Although all four of the second-ranked drivers can tie Garvey for the most last-place finishes in 2010 in the final two events this season, none of those drivers have more than four bottom-five finishes, far less than Garvey’s 13. It is Garvey’s first LASTCAR championship in any of the top three NASCAR divisions.

The 2010 Owner’s Championship, however, is still up for grabs between Team Gill Racing’s #95 and Shane Sieg’s #93, as Gill leads by a single finish. Ironically, Mike Garvey did not race at Texas in his driver’s title-clinching event - Sieg himself drove the truck to a 30th-place finish - and the #95 team did not enter the Texas race at all. If Sieg’s team can only tie Gill in the standings, the #93 team will still be able to clinch the Owner’s Championship: Sieg’s #93 already has 16 bottom-fives to Team Gill’s 11.

This Friday at Phoenix, Shane Sieg will again drive the #93. As of this writing, both Garvey and the #95 Team Gill Racing organization are absent from the 36-truck Entry List.

TRUCK STATS AND FACTS
*A truck had not finished last a Texas due to crash damage since 2006, when Kraig Kinser’s #46 Centrix Auto Finance Chevrolet fell out 55 laps into the 2006 Sam’s Town 400.
*This marks the first time the #20 had finished last in a Truck Series race at Texas.