TRUCKS: Jackson Finishes Last At Talladega While #93, #95 Get TV Time 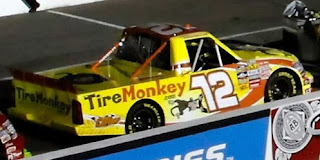 John Jackson picked up the 3rd last-place finish of his NASCAR Camping World Truck Series career in Saturday’s Mountain Dew 250 Fueled By Fred’s at Talladega when his #72 James Carter Attorney / SponsorTheTruck.com Chevrolet fell out with oil pressure problems after completing 5 of the race’s 95 laps.

The Scottish teammate to Mario Gosselin qualified for his 3rd start of 2010 in the 33rd spot at a speed of 172.494 mph. No teams were sent home after time trials as only 34 trucks, including Jackson’s, were on the initial entry list: Dominick Casola’s #00 and Jerick Johnson’s #24 filed post-entries late last week to fill the final two spots, timing in 35th and 36th.

Early in Saturday’s race, it appeared Norm Benning was on the way to scoring his first last-place finish of 2010 (and fourth of his career) when his #57 truck stalled in the early going and spent several laps in the garage area. However, he was back on track several laps down by the time both Jackson’s #72 and Johnson’s #24 had pulled behind the wall. Jackson edged Johnson for 35th by a single lap, and Benning’s return eventually slipped the #72 team to the final finishing position. Jackson’s teammate and owner Mario Gosselin was knocked-out by an engine failure on Lap 18, leaving him 34th at race’s end.

Meanwhile, in the LASTCAR championship hunt, both the top teams in the LASTCAR Owner’s Standings enjoyed solid performances. Driver’s Standings leader Mike Garvey, in Shane Sieg’s #93, finished on the lead lap in 12th, far better than the team’s previous season-best finish of 25th at ORP. Team Gill Racing tabbed ARCA standout Grant Enfinger to drive the second-ranked #95, which sped into the Top 10 in the closing stages of the race. Unfortunately, while running 7th with three laps remaining, Enfinger triggered a multi-car melee in turn one that ended his race, leaving him 22nd. The run was still the team’s best 2010 performance since Johnny Benson’s 8th-place finish at the Daytona season opener.

With three races to go and Team Gill’s #95 continuing to change drivers, time is running out for Truck Series drivers and teams to challenge Garvey and the #93 team for the division’s 2010 LASTCAR Driver’s and Owner’s Championships. Garvey and the #93 are currently on this week’s 38-truck entry list at Texas, but the #95 team has not entered. Among the second-ranked drivers, only Carl Long has a ride for the race in owner Daisy Ramirez’s #01 Koma Unwind Chevrolet. Barring further changes to the list and a 35th or better finish by Long, Garvey could clinch the Driver’s Championship at Texas, thanks to his series-leading 13 bottom-five finishes.

TRUCK STATS AND FACTS
*Jackson had not finished last since 2009, when his #72 DGM Racing / Sponsor TheTruck.com Chevrolet, also owned by Gosselin, fell out with transmission problems after 2 laps of the 2009 Copart 200 at Gateway. It was the first of two consecutive last-place finishes at Gateway by the #72 team: Johnny Champman followed suit after one lap of this year’s CampingWorld.com 200.
*This was the first time in Truck Series history that a driver had finished last with “oil pressure” as the listed problem.
*Neither Jackson nor the #72 had ever before finished last in a Truck race at Talladega.