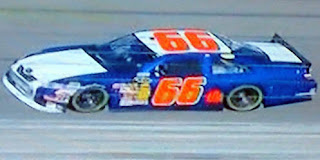 Mike Bliss picked up the 6th last-place finish of his NASCAR Sprint Cup Series career in Sunday’s Ford 400 at the Homestead-Miami Speedway when his unsponsored #66 PRISM Motorsports Toyota fell out with electrical problems after completing 10 of the race’s 267 laps.

With still-unconfirmed rumors abound that the Phil Parsons-owned team - and defending LASTCAR Sprint Cup Owner’s Champions - would be folding up in the offseason, PRISM did not bring the #55 to the track for the second time in three races. Despite the struggles the #66 team in particular has faced in qualifying this year, Bliss put the car solidly in the 30th spot at a speed of 174.831 mph, besting six “go-or-go-homers.” LASTCAR Champion Joe Nemechek would start next to him on the inside of Row 15.

On Friday, second-ranked Michael McDowell’s #46 Whitney Motorsports entry failed to qualify for the fourth time in the last five races despite once again carrying sufficient sponsorship to run the whole race. Patrick Carpentier and the Latitude 43 Motorsports team also missed the show, and the former Roush-Fenway team ends its first season without recording a single last-place finish.

On race day, Bliss went behind the wall during the opening green flag run, followed by J.J. Yeley after Tommy Baldwin’s plain white Chevrolet stayed out to lead during the Lap 19 caution for David Reutimann’s tire failure. Although Joe Nemechek had returning sponsorship from England’s Stove Works, non-profit organization B.R.A.K.E.S., and the EAA Young Eagles youth aviation program, his #87 Toyota still went behind the wall after 29 laps. Landon Cassill’s exit in the partially-sponsored Empire Steel Buildings #64 made it four retirees in the first 35 laps.

Toyota leaves this 2010 Cup season with 28 of the year’s 36 last-place finishes. The top four teams in the Owner’s Championship rankings scored 21 of them.

CUP STATS AND FACTS
*It was Bliss’ first last-place finish since 2009, when his #09 Miccosukee Resorts & Gaming Dodge fell out with an engine failure 11 laps into the 2009 Pepsi 500 at Fontana. It was the Bliss’ third of three last-place finishes for Phoenix Racing that season.
*The #66 had not finished last in a Cup race at Homestead since the inaugural event in 1999, the Pennzoil 400 presented by K-Mart, where Darrell Waltrip’s Big K-Mart / Route 66 Ford left the race after 85 laps with handling woes.
*A Cup driver had not finished last due to electrical woes since the Pepsi Max 400 at Fontana, six races ago, where Jason Leffler gave PRISM Motorsports what had been its most recent last-place finish.

CUP LAPS COMPLETED STATS
*Unlike those in the Nationwide and Truck Series, this year’s group of Sprint Cup last-placers includes just 5 drivers who completed less than 10 laps: Robby Gordon in the spring Atlanta race (3 laps), Max Papis in the June Michigan race (8), Dave Blaney at Daytona in July (4), Jeff Fuller at Talladega last month (2), and Brendan Gaughan last week at Phoenix (1). Setting those five aside, Cup last-placers have completed an average of 41.1 laps. Comparing all 36, Cup last-placers completed 1292 of the 10778 laps, roughly 11.99% of the season total.