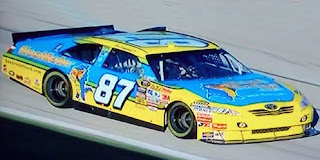 Joe Nemechek picked up the 24th last-place finish of his NASCAR Sprint Cup Series career in Sunday’s AAA Texas 500 at the Texas Motor Speedway when his #87 HostGator.com Toyota fell out with an engine failure after completing 12 of the race’s 334 laps.

The finish was Nemechek’s 30th between all three of NASCAR’s top divisions, moving him into sole possession of 4th in the all-time LASTCAR standings and within two finishes of the late J.D. McDuffie for 3rd.

One week after Nemechek led the opening lap at Talladega last Sunday, sponsor HostGator.com re-upped for the Texas race, giving the veteran two consecutive weeks of full Cup sponsorship for the first time since he brought NEMCO back into the series in 2009. On Friday, he ran an aggressive 190.121 mph qualifying lap that locked him into the field in 34th as the fourth-fastest go-or-go-homer, more than enough to beat the six teams that failed to make the field. Nemechek also showed remarkable driving skill by maintaining control when his right-front tire drove through the infield grass entering the quad-oval, kicking up a huge cloud of dirt.

On race day, Nemechek slipped to 42nd on Lap 3, but was moving to 39th on Lap 9 when defending LASTCAR Champion Dave Blaney fell to 43rd. Blaney, returning to Front Row Motorsports to drive the team’s #37 A&W Ford, was overheating in the early laps. Before Blaney could pit, however, Nemechek’s engine suddenly exploded in turn one on Lap 11, sending his #87 sliding up the track and into the outside wall. Nemechek was uninjured in the incident and limped his Toyota onto pit road, then to the garage, under the ensuing caution. Blaney earned the Lucky Dog under the yellow, but blew his own engine 12 laps after the restart and went to the garage, joined two laps later by teammate Travis Kvapil in the #34. All three cars did not return to the race.

Nemechek did not quite clinch his second LASTCAR Sprint Cup Driver’s Championship at Texas, however, as one driver still stands in his way:

NEMECHEK AND MCDOWELL BOTH STILL IN CONTENTION FOR 2010 LASTCAR SPRINT CUP DRIVER’S CHAMPIONSHIP; DEFENDING CHAMPION BLANEY ELIMINATED
With two races to go, Nemechek now has a two-finish lead on both Dave Blaney and Michael McDowell, who can still mathematically tie Nemechek’s seven last-place finishes in 2010 with a two-race sweep. However, in reality, this year’s battle for the LASTCAR Sprint Cup Driver’s Championship has become a two-horse race between Nemechek and McDowell.

The reason is that, as of now, Nemechek has 23 bottom-five finishes to McDowell’s 22 and Blaney’s 18. This means that McDowell could claim this year’s championship if he finishes last at Phoenix and Homestead while Nemechek finishes 38th or better (outside the bottom five) in both of those races, giving him 24 bottom-fives to Nemechek’s 23. Blaney, while still capable of tying Nemechek on finishes, has been eliminated from championship contention as he can only rack up 20 by Homestead.

However, if Nemechek finishes bottom-five either this week at Phoenix or next week at Homestead while McDowell bottom-fives in both, tying the two with 24 bottom-fives apiece, Nemechek will clinch the championship even if McDowell finishes last in both races. This is because Nemechek currently has an insurmountable lead on bottom-ten finishes: 29 to McDowell’s 23.

A bottom-ten tiebreaker would be a highly unusual event: no LASTCAR Cup championship has been this close since Jeff Gordon’s rookie season in 1993, where he took the LASTCAR Driver’s title by beating Bob Schacht’s two last-place finishes and three bottom-fives with six bottom-tens to Schacht’s three.

PHOENIX ENTRY LIST PREVIEW
For the first time in 2010, PRISM Motorsports scaled back to a single-car operation at Texas, only fielding the team’s #66 car with Mike Bliss stepping in for Johnny Sauter. The car qualified for the first time since Fontana and finished 39th after Bliss stayed out to lead a lap under the second caution on Lap 42. This weekend, both PRISM’s #55 and #66 will attempt to qualify with Bliss back in the #55 and Jason Leffler in the #66. As has been the case for much of PRISM’s existence, neither team has any sponsorship.

Joe Nemechek is also listed without a sponsor for the Phoenix race, whereas Michael McDowell, his Driver’s Championship contender, has funding from a company named “Super Pawn.” Dave Blaney, the defending LASTCAR champion, will return to Tommy Baldwin’s #36 following J.J. Yeley’s failed qualifying attempt at Texas; Baldwin’s Chevrolet is also currently without sponsorship.