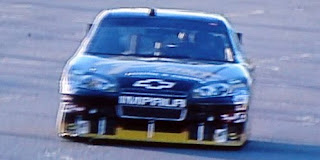 Brendan Gaughan picked up the 1st last-place finish of his NASCAR Sprint Cup Series career in Sunday’s Kobalt Tools 500 at the Phoenix International Raceway when his #71 South Point Hotel and Casino Chevrolet was involved in a single-car accident on Lap 2 of the 312-lap race. The finish came in Gaughan’s 37th series start.

It’s been a difficult 2010 season for TRG Motorsports. Bad luck and only sporatic sponsorship from TaxSlayer.com culminated in 2000 Cup Champion Bobby Labonte leaving the team at mid-season with only a handful of one-off appearances by the Texan since then. With drivers Mike Bliss, Andy Lally, and Landon Cassill aboard, the team was forced to park its #71 Chevrolets early in nearly a dozen races, most recently at Fontana last month, where Lally came home 36th.

As the team sank to 35th in Owner Points, however, the team has attracted just enough sponsorship to run these final races with returning drivers like Hermie Sadler and Chad McCumbee taking the controls. With the 36th-ranked Front Row Motorsports #38 team falling from Top 35 contention in recent weeks, TRG brought on Brendan Gaughan for Sunday’s Phoenix race with his family’s casino business footing the bill for another full-race run.

Locked-into the field on points, Gaughan did not have to worry about his struggles in qualifying and placed the #71 back in 41st spot at a speed of 132.197 mph. The race would be Gaughan’s first Sprint Cup start since the 2004 Ford 400 at Homestead, where he concluded his rookie season, and his first time in a Cup machine at all since he relieved Mike Bliss in the 2005 Pocono 500. Unfortunately, Gaughan would not be able to discover what his #71 could do.

Just after the first lap of Sunday’s race was completed, Gaughan’s right-front tire exploded entering turn one, sending the #71 hard into the outside wall. The Truck Series veteran was unhurt, but the car was wounded so badly that it could not negotiate the Phoenix track’s doglegged backstretch and had to drive through the dirt instead. Repairs proved impossible for the TRG team and the group was forced to call it a day. 42nd-place Brad Keselowski faced a similar fate less than 60 laps later when his right-front tire also failed in turn one, ending his day.

CUP STATS AND FACTS
*Although this was Gaughan’s first last-place finish in Cup competition, he has three other last-place runs in his 162-race Camping World Truck Series career: an early crash in the 2005 O’Reilly 200 presented by Valvoline MaxLife at Bristol, an engine failure in the 2006 racetickets.com 200 at Fontana, and another crash after the opening lap of the 2007 AAA Insurance 200. All three of these finishes came while driving his family-owned #77 Dodge.
*Gaughan is also the third driver to finish last in a Cup race at Phoenix after completing just the opening lap: Kenny Wallace, in Team III Racing’s unsponsored #24 Pontiac, had steering problems in his Cup debut at the 1991 Pyroil 500K. The next year, Rick Carelli quit the 1992 Pyroil 500K, parking his unsponsored #37 Marshall Chesrown Chevrolet following injuries sustained in a grinding Southwest Tour Series crash the previous day.
*No Cup driver has finished last after completing just the opening lap since 2007, when J.J. Yeley’s #18 Interstate Batteries Chevrolet was involved in a multi-car accident in the 2007 Samsung 500 at Texas.
*The #71 and Kevin Buckler’s Cup team scored their most recent last-place finish in 2009, when Bobby Labonte was involved in a multi-car accident six laps into the 2009 Price Chopper 400 at Kansas.
*The #71 had never before finished last in a Cup race at Phoenix.

However, both drivers failed to qualify for the race as two of the three teams that missed the show. McDowell turned in the slowest lap time of all and was the first car knocked-out of the field. With two cars left to qualify, Nemechek was on the bubble behind Jason Leffler in PRISM Motorsports’ #66. This allowed J.J. Yeley, in Latitude 43 Motorsports’ #26, to bump Nemechek out of the race, and Casey Mears’ #13 GEICO Toyota bumped-out Leffler.

Thus, with one race remaining in the season, McDowell is now mathematically unable to tie Nemechek for the most last-place finishes in 2010, giving Nemechek the title. Nemechek’s previous LASTCAR title run came in 2008, when he scored three last-place finishes in his final season driving Furniture Row Racing’s #78. The Florida driver clinched that championship on a “bottom-five” tiebreaker, besting A.J. Allmendinger’s 6 with his season total of 9.