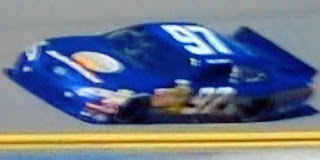 Jeff Fuller picked up the 5th last-place finish of his NASCAR Sprint Cup Series career in Sunday’s AMP Energy Juice 500 at Talladega when his #97 HeatRedefined.com Toyota fell out with rear gear problems after completing 2 of the race’s 188 laps. Fuller is now tied with Joe Nemechek for 4th in the all-time LASTCAR standings with 29 total last-place finishes across all three of NASCAR’s top divisions. Only Derrike Cope, Morgan Shepherd, and the late J.D. McDuffie have more.

Fuller, a longtime teammate of Nemechek in both the Nationwide Series, began aiding Nemechek’s Cup operation in 2010 at the restrictor plate tracks. In February, Fuller and his #97 Toyota finished last in the Gatorade Duels once Nemechek had successfully qualified his #87 into the big show. Fuller and the #97 returned for another attempt at Talladega, but withdrew before rain washed out qualifying. After missing the July event at Daytona, also set by points after time trials were washed out, Fuller returned to Talladega, where a sunny weekend welcomed the Sprint Cup Series.

Fuller did not get on the track during Friday’s first practice session, joining Johnny Sauter and PRISM Motorsports’ 2009 LASTCAR Champion #66 team in the garage, then ran 32nd in Happy Hour after only three timed laps. The next day, however, Fuller and Nemechek ramped up their “go-or-go-home” qualifying setups and stole the show by qualifying inside the Top 15: Fuller was 13th at a speed of 183.406 mph while Nemechek equaled his strong 4th starting spot from the 2008 Coke Zero 400 at Daytona with his second top-10 start of 2010. It would be Fuller’s first points-paying Cup start in five years, dating back to the 2005 MBNA RacePoints 400 at Dover. Sauter’s #66 was the slowest of the three cars that missed Sunday's race.

Although both Nemechek and Fuller had sponsorship, the team had already decided to have Fuller’s England’s Stove Works Toyota pull behind the wall in the early laps so that Nemechek’s Gator.com machine ran the entire race. As a result, Fuller fell to the rear before the start along with defending LASTCAR Cup Driver’s Champion Dave Blaney, who started an equally-impressive 7th in Tommy Baldwin’s unsponsored #36. When the race started, Fuller had already lost the draft, and he pulled behind the wall by Lap 2. Blaney followed suit 10 circuits later.

Nemechek, meanwhile, hustled his #87 up to the front, leading the opening lap of the race before getting shuffled back into the middle of the lead pack. He lost a lap in the early green-flag run, then used pit strategy to get back into the same sequence as the leaders. Unfortunately, with 8 laps to go, Nemechek blew a right-front tire, dropping enough metal debris in turns three and four to draw the next-to-last caution of the race. He avoided contact with the wall, however, and finished 27th.

Michael Waltrip, who brought Aaron’s sponsorship to PRISM Motorsports #55 for both Talladega races, repeated his promising run in the spring when he contended for the lead on a few occasions, even pacing the field for three laps. However, like Nemechek, Waltrip suffered bad luck in the final 10 laps of the race. Coming to the white flag, he tangled with Scott Speed, A.J. Allmendinger, and Tony Stewart in the tri-oval, sending him spinning out of the Top 20. Waltrip came home 28th, one spot behind Nemechek, when the field froze.

Still, Sunday marked the first time in 2010 that either of the two cars from PRISM and NEMCO had finished a race under power.

With three races to go, Nemechek and NEMCO’s #87 still hold one-finish leads in both the LASTCAR Driver’s and Owner’s Championship Standings. However, this weekend at Texas, Dave Blaney is returning to Front Row Motorsports’ #37 and Michael McDowell is still running with sponsorship from Cash America, whereas Nemechek does not have sufficient sponsorship to run the distance in this week’s race. The Owner’s title may be locked up soon as well: PRISM Motorsports’ #66, second in the rankings, has continued to struggle in qualifying: Johnny Sauter will again attempt to get the car into the field on Friday.