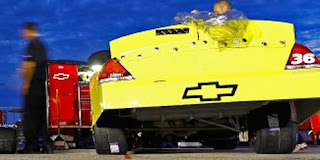 Kevin Hamlin picked up the 4th last-place finish of his NASCAR Nationwide Series career in Saturday’s 5-Hour Energy 250 at Gateway International Raceway when his unsponsored #36 TriStar Motorsports Chevrolet fell out after the first of 200 laps with brake problems.

As reported last week, Hamlin stepped in to replace Jeff Green, who scored all six of the #36 team’s previous last-place finishes in 2010. While Green, in Key Motorsports’ #40, qualified 25th, Hamlin qualified Green’s old ride 33rd at a speed of 132.271 mph, besting eight other “go-or-go-home” teams including the four that failed to qualify. On race day, Hamlin left the race early while Green went on to finish 29th.

Saturday’s last-place battle was close due to the sheer number of cars that left the race early: in all, seven cars, including Hamlin’s, fell out of Saturday’s race in the first four laps. Two of these cars were in a position to deny Hamlin the finish, as both Nashville last-placer Danny O’Quinn, Jr. in D’Hont-Humphrey’s #90 and Brian Keselowski’s K-Automotive #26, 43rd last Friday in Charlotte, also went to the garage after Lap 1.

Now, with three races to go in the 2010 season, both LASTCAR Nationwide Series championships have officially been clinched:

2010 LASTCAR N’WIDE OWNER’S CHAMPION: #92 - K-AUTOMOTIVE MOTORSPORTS
K-Automotive Motorsports’ #92, which finished 38th with Andy Ponstein on Saturday, has already claimed the 2010 LASTCAR Nationwide Series Owner’s Championship. Even if TriStar’s #36 finished last in all three remaining races while the #92 finished 38th or higher in each, the #92 would still have seventeen bottom-five finishes to the #36's thirteen. This means that, in reality, the #92 team clinched the Owner’s title last Friday at Charlotte when Parker Kligerman’s crash denied the #36 a potential eleventh last-place finish. (NOTE: Last week’s N’WIDE post for Charlotte has been updated to reflect this)

2010 LASTCAR N’WIDE DRIVER’S CHAMPION: DENNIS SETZER
Dennis Setzer, who did not enter the Gateway race so he could attempt to race K-Automotive’s Cup car into Sunday’s race at Martinsville, has now claimed the 2010 LASTCAR Nationwide Series Driver’s Championship. Jeff Green failed to finish last on Saturday and, ss the only driver in a position to tie Setzer for the most 43rd-place finishes this season, can only lose the title on bottom-five finishes. Mathematically, Green can only close to within five finishes of Setzer’s 17 bottom-fives. It is Setzer’s first LASTCAR title in any of NASCAR’s top three divisions.

N’WIDE STATS AND FACTS
*The #36 had not finished last at Gateway since 1999, when Tim Fedewa’s Stanley Tools Pontiac fell out with engine failure after 66 of the 200 laps that made up the 1999 Carquest Auto Parts 250.
*It is Hamlin’s first last-place finish since 2009, when he scored his other three last-place finishes. His most recent finish came in the Nationwide season finale Ford 300 at Homestead, driving the #37 BCR Ford lost the transmission 3 laps into the race. Interestingly, Hamlin’s first-ever last-place finish also came at Gateway, where his #42 Smith Iron Works Dodge fell out with electrical problems without completing a single lap of the 2009 Missouri-Illinois Dodge Dealers 250.