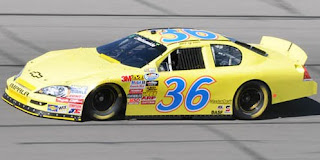 Jeff Green picked up the 14th last-place finish of his NASCAR Nationwide Series career in Saturday’s CampingWorld.com 200 at the Auto Club Speedway of Southern California when his unsponsored #36 TriStar Motorsports Chevrolet fell out with fuel pressure problems after completing 2 of the race’s 150 laps.

Green now has sole possession of 2nd in the all-time LASTCAR Nationwide Series standings and moves into a tie with Buddy Baker, Jimmy Means, and Cale Yarborough for 10th all-time across all three NASCAR divisions with 17 overall last-place finishes.

Green qualified 24th for the race at a speed of 176.151 mph, fifth-fastest among the teams not locked-into the race on Owner Points. The run was more than enough to bump out Johnny Chapman and Eric McClure, who were the only two drivers to miss the race. On Saturday, Green went behind the wall first, followed by both current LASTCAR Nationwide Driver’s Championship leader Dennis Setzer in the #92 and Chase Miller, driving for the #82 team that Matt Carter finished last with at Watkins Glen.

N’WIDE STATS AND FACTS
*Green is the first Nationwide Series driver to ever finish last with fuel pressure as the listed issue.
*Neither Green nor the #36 had ever before finished last in a Nationwide Series race at Fontana.