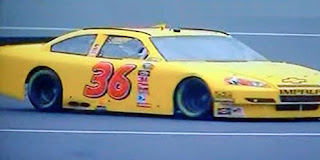 J.J. Yeley picked up the 2nd last-place finish of his NASCAR Sprint Cup career in Saturday’s Bank of America 500 at the Charlotte Motor Speedway when his unsponsored #36 Tommy Baldwin Racing Chevrolet fell out with ignition problems after completing 73 of the race’s 334 laps.

Yeley qualified 40th for Saturday’s race at a speed of 187.363 mph during the nail-biting final moments of Thursday’s qualifying session. When his first timed lap was too slow to make the field, Yeley dug deep and picked up three-hundredths of a second, just barely enough to edge Jeff Green’s #64 for the next-to-last spot in the field. This proved significant as Casey Mears, whose #13 was next to qualify, was unable to edge both Yeley and Green. This meant Mears, the next-to-last car to qualify, would be sent home and that Yeley would race on Saturday. Green was locked into the 43rd spot when Johnny Sauter’s #23 R3 Motorsports entry turned in the slowest speed of the night.

On Saturday, Ryan Newman’s #39 was the first to slip to last place following a crash on lap 2 that sent his 11th-fastest car behind the wall. One lap after the race restarted on the 8th circuit, Bill Elliott’s #21 fell off the pace on the backstretch and also headed to the garage. By lap 14, Elliott was back on the track, but Landon Cassill, fastest of the “go-or-go-homers” in his #09, was off the track. Cassill rejoined the race before the lap 24 caution and scored the Lucky Dog. Newman remained behind the wall, but not officially out of the race, in 43rd.

From there, another last-place battle took shape like those at Phoenix and Atlanta earlier this season. Michael McDowell’s #46 was the only car that skipped pit stops under the lap 24 yellow, so he inherited the lead for the restart. McDowell spun the tires on the restart, slipped back through the field, then pulled to the apron in turn three on lap 30 to go to the garage. In between those moments, both Yeley and Green had spent time in the garage before coming back out with McDowell, Yeley one lap further in arrears than both McDowell and Cassill with Newman and Elliott still in the final two positions. Green received the next Lucky Dog on lap 34 and was still just two laps down in 38th on lap 50, at which point the bottom five behind him looked like this:

By lap 66, Newman was back on the track 58 laps down. Cassill was back behind the wall and had slipped past Yeley to 41st, closing on Elliott for 42nd. Green went back behind the wall by lap 83 and, by lap 98, he had slipped into the Bottom Five all the way down to 42nd. By the time Green returned to the track 35 laps down on the 103rd circuit, McDowell, Cassill, and Yeley were back off the track in 38th, 39th, and 40th. Yeley was the first to drop out of the race at that point, slipping him past Green to 42nd by lap 121 and nudging Elliott out of the Bottom Five. By lap 137, Newman had passed Yeley for 42nd, finally dropping the #36 into last place.

By then, Kasey Kahne’s #9 had been eliminated in a two-car crash after his brakes failed in turns three and four, sending him careening into Sam Hornish, Jr.’s #77. Kahne, frustrated and ill, called it a night and Yeley was then called-upon as Kahne’s relief driver. In the end, Yeley nursed Kahne’s car to a 38th-place finish, crossing the line under power. Hornish’s Dodge, destroyed in the Kahne accident, was unable to continue and fell to 40th, keeping the #9 out of the Bottom Five. Elliott and Newman finished 35th and 36th, respectively.

LASTCAR Driver’s Championship leader Joe Nemechek failed to qualify for his fourth race of 2010 (and his third out of the last eight races) as the fastest car to not make the field. Nemechek maintains a one-finish lead in the Driver’s Standings over both McDowell and defending LASTCAR Driver’s Champion Dave Blaney, who was making one of his handful of starts for Front Row Motorsports. This week at Martinsville, Blaney will return to the #36 team, with whom he finished last at Dover last month. Yeley will return to Whitney Motorsports to make his second attempt in the #81 as McDowell’s teammate.

One week after Jason Leffler finished last for PRISM Motorsports’ #66 team, both Leffler and teammate Mike Bliss missed the show, allowing Nemechek’s #87 team to hold onto its one-finish lead in the LASTCAR Owner’s Championship standings. Yeley’s finish gave Tommy Baldwin Racing its third 43rd-place showing of 2010, giving the team sole possession of 4th in those standings.

CUP STATS AND FACTS
*This was Yeley’s first last-place finish in Cup since 2007, when his #18 Interstate Batteries Chevrolet was involved in a multi-car accident after the first lap of the 2007 Samsung 500 at Texas. He has just one other last-place finish in NASCAR competiton: a lap 4 engine failure in the 2005 Ameriquest 300, a Nationwide Series race at Fontana.
*Yeley is the first driver to finish last in a Cup race at Charlotte with ignition failure since 1984, when the late Benny Parsons’ #55 Copenhagen Chevrolet fell out after 6 laps of the 1984 World 600.
*The #36 had never before finished last in a Cup race at Charlotte.