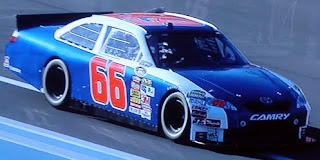 Jason Leffler picked up the 5th last-place finish of his NASCAR Sprint Cup career in Sunday’s Pepsi Max 400 at the Auto Club Speedway of Southern California when his unsponsored #66 PRISM Motorsports Toyota fell out with electrical problems after completing 23 of the race’s 200 laps.

Leffler qualified 33rd for Sunday’s race at a speed of 181.424 mph while his teammate, Mike Bliss, was unsuccessful in qualifying the #55. It would be the #66 team’s second start in the last eight races and its first since Bristol, five failed qualifying attempts ago. Leffler, who was 2nd-fastest among the “go-or-go-homers” in opening practice (30th overall), fell to the back before the start of Sunday’s race along with the #87 of current LASTCAR Cup Driver’s Championship leader Joe Nemechek and Atlanta last-placer Denny Hamlin.

Early in Sunday’s race, first Nemechek, then the #34 of Travis Kvapil fell to 43rd before Kevin Conway dropped back to the rear before the ten-lap mark. Landon Cassill, again in the #64 that he finished last with at Kansas, was the first to go behind the wall, followed by Leffler, who reported an overheating problem as he joined Cassill in the garage area. Nemechek, J.J. Yeley’s #36, and the #09 of Bobby Labonte followed by lap 33, but that changed seven laps later. On lap 40, when Greg Biffle lost his engine in turn four, Nemechek was already leaving the garage area by the time Biffle was entering. Labonte and Cassill soon followed the #87 onto the track, but Leffler, who had already climbed out of the car, did not. This dropped the #66 down to 43rd by a ten-lap gap over Yeley in 42nd.

Though Leffler sits a distant 2nd in the LASTCAR Driver’s Championship rankings, PRISM Motorsports’ #66 team is back in the battle for the owner’s title. Just one finish behind Nemechek’s NEMCO Motorsports #87, the #66 is very much in contention to defend its LASTCAR championship last year that it shared with 2009 driver Dave Blaney.

BONUS STAT: LAST-PLACE FINISHES BY CAR NUMBER
*The #66 has now finished last in 40 Cup Series points races, more than any other car number.++ Previous to Sunday, the number was tied with the #41, which has not finished last since 2008 when Reed Sorenson blew an engine in the 2008 Aaron’s 499 at Talladega:

++Note: These rankings may not be accurate as 49 races, mostly from the first ten Cup Series seasons, do not have the last-place finisher’s car number listed. Racing-reference.info, which has the most complete database, was used to reduce this error as much as possible.

Thank you for your work on this, as a stat oriented guy I love this! I always wanted to do one based on DNQ's but that data is usually incomplete or difficult to find!