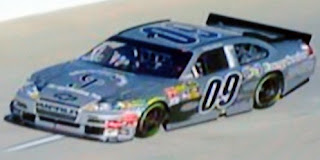 Bobby Labonte picked up the 11th last-place finish of his NASCAR Sprint Cup career in Sunday’s Tums Fast Relief 500 at the Martinsville Speedway when his #09 C&J Energy Services Chevrolet fell out with overheating problems after completing 197 of the race’s 500 laps.

Last week at Charlotte, Labonte finished 22nd in the first Cup race for Stavola-Labonte Racing, co-owned by Bobby’s brother Terry. Martinsville would see the 2000 champion return to Phoenix Racing, which Labonte joined on a part-time basis following his departure from TRG Motorsports earlier this year.

Hopes were high for a good performance on the short track as Phoenix Racing’s #09 would have full primary sponsorship for just the second time in 2010 (the first since Daytona in July, where Coke Zero came aboard). Last month, C&J Energy Services, based in the Labonte family’s hometown of Corpus Christi, Texas, had signed on to fund a handful of 2010 races. Phoenix Racing would also have a Hendrick engine at their disposal for the Martinsville weekend.

The new silver-and-black Chevrolet qualified 23rd for Sunday’s race at a speed of 96.190 mph. The #09 was also 8th-fastest in Saturday’s morning practice, during which he turned in the second-fastest 10-lap run, trailing only A.J. Allmendinger.

Early in Sunday’s race, current LASTCAR Sprint Cup Driver’s Championship leader Joe Nemechek fell to 43rd, followed by J.J. Yeley, who qualified Dusty Whitney’s #81 for the second time this season. Nemechek carried returning sponsorship from England’s Stove Works and Yeley inherited Red Line Oil from teammate Michael McDowell, who failed to qualify his #46, but it was still unclear whether either car would be able to run the entire race. This was also a concern for Landon Cassill, who was the first driver to go behind the wall when his Larry Gunselman-owned #64 slowed on Lap 22.

Mechanical problems then plagued Front Row Motorsports teammates Travis Kvapil in the #38 and David Gilliland in the #37, who both spent time in the garage area after the first caution came on Lap 48. Gilliland spent more time behind the wall than Kvapil and fell to 42nd, both teams listed as “off the track” by the time defending LASTCAR Champion Dave Blaney pulled the #36 behind the wall around Lap 78. However, as the race neared the 100-lap mark, none of these teams had officially left the race, and Nemechek and Yeley stayed out of the garage altogether.

Meanwhile, Bobby Labonte struggled just outside the Top 30. On Lap 133, he tangled with Ken Schrader and Marcos Ambrose during an ill-timed three-wide battle off turn two, but avoided serious damage. By Lap 166, Gilliland, Cassill, and Blaney had all taken turns returning to the track with Gilliland and Cassill still in the bottom two positions, each more than 100 laps behind the leaders.

By the time the eighth caution fell on Lap 210, Bobby Labonte had gone behind the wall, K.O.’d by an overheating engine. With Labonte the first officially retiree from the race in 38th with all five of the cars trailing him either laps down or “off,” the goal for those teams became running enough laps to beat Labonte. This combatants were not only Cassill, Gilliland, and Blaney, but also Regan Smith and Clint Bowyer, who were logging laps following separate mid-race crashes:

As the race wound down, no driver and team fought harder to pass Labonte than Landon Cassill and “The Gunselman Gang’s” #64, who remained in 43rd for much of the entire race. Once the team learned of Labonte’s exit, the Gunselman crew fought to keep their car in one piece for as long as possible. In doing so, the team would go on to run more laps than it had since Todd Bodine ran 227 laps during the team’s Las Vegas debut last year. Unfortunately for the #64 team, their efforts were hampered by an electrical glitch that kept shutting the car off randomly, forcing two extended stays behind the wall after Labonte withdrew. The second stop came after Lap 312, when Labonte had slipped to 42nd, and by then, the team was struggling to find another set of tires. On Lap 349, Cassill returned to the race 167 laps down, the team knowing they were just 13 laps from passing Labonte. At last, on Lap 362, the team succeeded, and a Lap 366 radio transmission said “Next time by, get the hell outta here.” Cassill finished 42nd, the team unable to run the car another 60 laps to pass 41st-place Joe Nemechek, who by then had long fallen out with Yeley and Casey Mears.

Nemechek and NEMCO Motorsports remain the leaders in the LASTCAR Cup Driver’s and Owner’s Championships for 2010. At this point, their nearest competitors are running out of time:

In the Driver’s Championship, Michael McDowell has secured enough sponsorship from Red Line Oil and Cash America to run the distance in all four of this season’s remaining races; Whitney’s primary car will not have to “start-and-park” for the rest of 2010. Dave Blaney will only be running partial races for Tommy Baldwin part-time, pending any future starts for Front Row Motorsports. J.J. Yeley will run two of those races in the #36, splitting time with one more start at Phoenix in Whitney’s #81.

In the Owner’s Championship, both PRISM Motorsports cars failed to qualify for the Martinsville race, and the team’s #66 and #55 remain one and two finishes, respectively, short of tying Nemechek for the lead. This Sunday at Talladega, PRISM’s #55 will receive full funding from Aaron’s for the second time in 2010 as Michael Waltrip looks to follow-up his promising April run with the team. There is no new information regarding sponsorship for PRISM’s #66, but the team’s struggles in qualifying may undermine the team’s Owner’s Title defense.

CUP STATS AND FACTS
*The finish was Phoenix Racing’s 3rd in 2010 and its first since Aric Almirola was felled by a vibration 23 laps into this year’s Shelby American at Las Vegas. Interestingly, Sunday saw Almirola make his first Cup race since the spring race at Martinsville, having returned to replace the released Kasey Kahne in the Budweiser Ford. Almirola finished 21st on Sunday after finishing 41st in the spring.
*It was Labonte’s first last-place finish in just over a year, dating back to when his #71 Mahindra Tractors Chevrolet was involved in a multi-car crash after 6 laps of the 2009 Price Chopper 400 at Kansas.
*Labonte had not finished last in a Cup race at Martinsville since 2007, when his #43 Cheerios Dodge finished under power, 235 laps down, in the 2007 Goody’s Cool Orange 500.
*The #09 had not finished last in a Cup race at Martinsville since 2004, when Joe Ruttman’s Miccosukee Dodge lost the brakes two laps into the 2004 Advance Auto Parts 500.
*The 197 laps Labonte completed were the most by a last placer since 2008, when Kurt Busch’s #2 Miller Lite Dodge crashed after completing 207 of the 267 laps that made up the 2008 Ford 400 at Homestead.