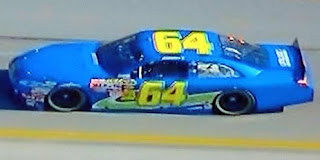 Landon Cassill picked up the 1st last-place finish of his NASCAR Sprint Cup Series career in Sunday’s Price Chopper 400 presented by Kraft at the Kansas Speedway when his unsponsored #64 Gunselman Motorsports Toyota fell out with rear gear problems after completing 33 of the race’s 267 laps. The finish came in Cassill’s 10th series start.

The Gunselman team was the third different organization Cassill had driven for during this, his first year of Cup Series competition. In nine previous starts, he had driven both TRG Motorsports’ #71 and the #09 owned by Phoenix Racing. During that time, Cassill has only been given enough funding to complete one of those races: when he finished 33rd in the #71 Post-9/11 G.I. Bill Chevrolet at Richmond, four races ago. At the same time, he has also proven to be a very solid qualifier: his only DNQ to date was for last month’s race at Atlanta and he qualified 15th for the race at Michigan the month before.

Gunselman tabbed Cassill after Monday, when both his #64 and TRG’s #71 were without a listed driver on the initial Kansas entry list. On Wednesday, Tony Raines, Gunselman’s prior driver, took a turn in the #71, and Cassill filled the remaining spot in the #64. On Friday, Cassill attempted to qualify Gunselman’s speedway car, last seen in July at Chicago and Indianapolis. He got the #64 into the race, timing in 35th at a speed of 171.985 mph.

In the race itself, Cassill remained toward the back of the field while Raines fell to 43rd during the opening laps. Kevin Conway, driving Robby Gordon’s #7, was next to fall to last by lap 13, and Conway’s ExtenZe Toyota was lapped soon after. By lap 32, the leaders had lapped four more cars, including Raines, and Cassill pulled behind the wall on the next circuit. His was the only car off the track at that point, dropping him to 43rd in the next few circuits. The lapped J.J. Yeley, in Tommy Baldwin’s #36, picked up the Lucky Dog on lap 43, then went behind the wall two laps after the restart, leaving him 42nd.

CUP STATS AND FACTS
*This was Gunselman and the #64 team’s first last-place finish of 2010; their previous one came in last summer’s Sunoco Red Cross Pennsylvania 500 at Pocono when Mike Wallace was parked after 13 laps for not having a pit crew.
*The #64 had never before finished last in a Cup race at Kansas Speedway.
*Cassill has one other last-place finish in NASCAR competition, when his #98 Chevrolet crashed out of the opening lap of this year’s NASCAR Camping World Truck Series opener, the 2010 NextEra Energy Resources 250 at Daytona.