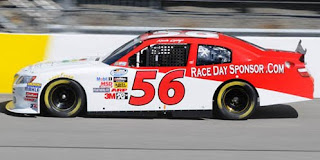 Kevin Lepage picked up the 10th last-place finish of his NASCAR Nationwide Series career in Friday’s Virginia 529 College Savings 250 at the Richmond International Raceway when his #56 Hyatt Place Richmond Airport Toyota fell out with fuel pump problems after completing 6 of the race’s 250 laps.

The finish moved Lepage into a tie with Mike Harmon and the late John Linville for 5th in the LASTCAR Nationwide Series rankings and into a tie for 6th all-time with Dave Blaney.

Lepage qualified 22nd for the race at a speed of 121.425 mph, his Toyota sixth-fastest among the “go-or-go-homers” more than fast enough to make Danny Efland’s #07 the only car to DNQ. During the opening green-flag run, Lepage pulled his new car behind the wall for the night. All-time LASTCAR leader Derrike Cope followed suit under the lap 12 caution, his brake problems leaving him 42nd at the finish. Cope has not finished last in a Nationwide Series race since the February race at Fontana last year.

Current LASTCAR Nationwide Series leader Dennis Setzer and his #92 were again absent from the entry list, as was owner Brian Keselowski. In their place, Parker Kligerman made another fully-funded run at the checkers in Keslelowski’s #26 and came across the line in 15th.

N’WIDE STATS AND FACTS
*The finish was Lepage’s second of 2010, the other coming at Road America in June while driving owner Johnny Davis’ #04. Lepage and owner John McNelly’s #56 had come close to finishing last twice this year, finishing 42nd at Nashville in the spring and at Michigan last month.
*Owner John McNelly and the #56 had finished last at Richmond just one other time, when the TEREX / Western Sizzlin car of Kevin Grubb crashed after the opening lap of the 2006 Emerson Radio 250. The team’s next start at Memphis the following month with driver Tim Schendel also brought a last-place finish when his Power Equipment Company and Texpar Inc. machine crashed 51 laps into the Sam’s Town 250. Until Friday, the #56 had not finished last in a Nationwide race after Schendel’s finish.
*No driver had finished last in a Nationwide Series race because of a fuel pump issue since 2000, when Jack Sprague’s #15 Albertson’s Chevrolet fell out 17 laps into the Albertson’s 300 at Texas.