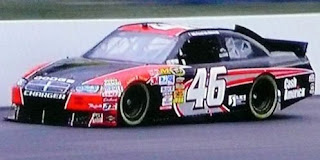 Michael McDowell picked up the 7th last-place finish of his NASCAR Sprint Cup Series career in Sunday’s Sylvania 300 at the New Hampshire Motor Speedway when his #46 Cash America Dodge fell out with engine problems after completing 29 of the race’s 300 laps.

McDowell arrived at New Hampshire in one of owner Dusty Whitney’s new Richard Childress-prepared Chevrolets, likely the same one the team ran two weeks ago at Atlanta. Unfortunately, just one lap into the opening practice, an oil line ruptured, sending the car hard into the wall off turn two. McDowell was uninjured, but the car was destroyed.

The team scrambled to get ready for qualifying, toiling hard to get their short track-setup Dodge ready for its timed lap. McDowell drove the car as hard as he could, timing in at 129.525 mph, but was not yet locked-into the field. Only when Travis Kvapil timed in slower was the #46 guaranteed the 38th starting spot.

On race day, McDowell fell to the rear as early as lap 10, but moved up to 42nd when Scott Speed wrecked off turn four on the 26th circuit. On the restart, both McDowell and Landon Cassill, driving Larry Gunselman’s #64, pulled behind the wall with Cassill 42nd, poised to take last place from Speed, should he return. By the time the second caution ended on lap 44, McDowell and Cassill had returned to the track and gone to the garage a second time with McDowell falling to 42nd. Finally, when Speed returned to the track on lap 113, McDowell fell to last place.

Current LASTCAR Driver’s Championship leader Joe Nemechek, who qualified 7th at the track in June, stayed out to lead lap 28 under the first caution and also went behind the wall a couple times before finishing 40th, having completed just 60 laps.

UPDATE: After McDowell’s car went through mandatory post-race inspection as the lowest finishing non-wrecked car in Sunday’s race, NASCAR discovered that the valves to the #46's engine were too light. The engine, acquired from Gillette-Evernham Motorsports and rebuilt by Arrington Engines, resulted in the loss of 50 driver and owner points, plus a $50,000 fine. Crew chief Jeremy LaFaver has also been suspended from NASCAR competition for six weeks.

CUP STATS AND FACTS
*The #46 had not finished last in a Cup Series race since 2002, when Frank Kimmel’s Advance Auto Parts Ford fell out with overheating problems 8 laps into the 2002 Pocono 500 at Pocono.
*It was owner Dusty Whitney’s first-ever last-place finish in Cup Series competition.
*McDowell has now finished last for three different teams in the 2010 Cup Series season: Dusty Whitney’s #46, as well as both PRISM Motorsports’ #55 (3 finishes) and #66 (1).
*McDowell’s last-place finish was the first by a Dodge in 2010. The last Dodge to finish 43rd in a Cup race was Tony Raines’ Long John Silvers #37 in last fall’s Checker O’Reilly Auto Parts 500 at Phoenix.
*The finish also ended an incredible 14-race last-place streak by Toyota that was likely the longest by any manufacturer in NASCAR history. The last non-Toyota to finish last was Johnny Sauter’s run in Tommy Baldwin’s #36 at the Autism Speaks 400 at Dover back in May.