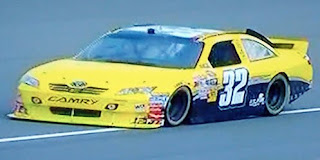 Jason Leffler picked up the 4th last-place finish of his NASCAR Sprint Cup Series career in Saturday’s Air Guard 400 at the Richmond International Raceway when his unsponsored #32 Braun Racing Toyota fell out with brake problems after completing 30 of the race’s 400 laps.

Leffler became the newest driver for Braun Racing’s part-time Cup Series program last week at Atlanta, but was unable to make the field, resulting in the team’s third consecutive DNQ. However, at Richmond, Leffler qualified 35th at a speed of 125.331 mph and was thus able to make his first Cup start since he finished 32nd in the 2008 Allstate 400 at the Brickyard.

Unfortunately, as this was one of the races where sponsor Dollar General would not fund the #32 team, Leffler pulled behind the wall after 30 laps with all four of his brake rotors glowing bright red. When the #32 team officially called it a night, the team locked Greg Biffle into the 2010 Chase field and bumped Kevin Conway’s lapped machine off the 43rd spot. Current LASTCAR Cup Series leader Joe Nemechek, with returning sponsorship from the Washington Music Center, made at least one trip to the garage after Leffler’s departure and briefly returned to the track before rear gear problems took him out after he completed 61 laps.

PRISM Motorsports’ #55 team remains locked in a three-way battle for 2nd in the 2010 LASTCAR Owner standings, two finishes behind Nemechek’s #87. Mike Bliss got the car into the show thanks to a great run off turn four during his second timed lap, bumping Terry Labonte’s Stavola-Labonte Racing-owned #10 out of the field. Driver and team were able to buy Bliss’ ride, however, and Labonte was able to drive the #55 while carrying his sponsorship from Gander Mountain. Unfortunately, a flat right-front tire sent him into the wall on lap 145, ending his night.

Teammate Scott Riggs in PRISM’s #66 was among the five teams that failed to qualify.

Denny Hamlin went on to win the race, making him the first Cup driver since Juan Pablo Montoya in 2007 to finish last in a Cup points race, then rebound with a win in the next event. In June 2007, Montoya finished last after a lap 68 crash in the 3M Performance 400 at Michigan, then won his first Cup race the next week in the Toyota / Save Mart 350 at Sonoma.

The last time the opposite happened - when a driver won a race, then finished last in the next event - was when Mark Martin won the 2009 Subway Fresh Fit 500 at Phoenix, then was taken-out in a multi-car crash at the start of the Aaron’s 499 at Talladega a week later.

CUP STATS AND FACTS
*The race marked Leffler’s first last-place finish in six years, dating back to a lap 3 crash that ended his run in the 2004 Brickyard 400 at Indianapolis. At the time, Leffler was driving the #60 Haas Automation Chevrolet owned by Gene Haas.
*The finish was Braun Racing’s second in 2010, the other coming with Reed Sorenson at Darlington.
*It was the fourth time the #32 had ever finished last in a Cup race at Richmond: Dick Trickle was the first when his Mett’s Tours Chevrolet crashed after the opening lap of the 1994 Pontiac Excitement 400. The most recent was Bobby Hamilton’s Tide Chevrolet, out of the 2005 Chevy Rock ‘n Roll 400 with crash damage after 193 laps.

Have used this firm 6 years. Consistently prompt, courteous, well-informed, and mindful of commercial property, rather valued. Have suggested to all.
מישלוץ טכנאי מזגנים has actually constantly offered exceptional solution for me. I have actually used them to service my systems for a variety of years. טכנאי מזגנים ראשון לציון