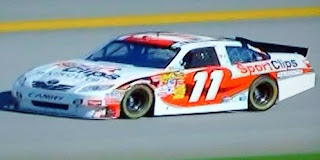 Denny Hamlin picked up the 4th last-place finish of his NASCAR Sprint Cup Series career in Sunday’s Emory Healthcare 500 at the Atlanta Motor Speedway when his #11 Sport Clips Toyota fell out with an engine failure after completing 143 of the race’s 325 laps.

On Saturday, Hamlin won the pole for the race at a speed of 187.380 mph. It was his first pole of the season, ending a nearly one-year drought back to last fall’s Pepsi 500 at the Auto Club Speedway of Southern California, where Hamlin crashed while leading and finished 37th. In the Atlanta race, Hamlin still had one of the best cars on the track and traded the lead several times with Ryan Newman, Tony Stewart, and Carl Edwards. In all, Hamlin would lead 74 laps, second only to Stewart’s 176.

Meanwhile, the battle for last-place was unusually competitive as five underfunded teams went in and out of the garage several times for the first half of the race. Kevin Conway, driving Robby Gordon’s #7 that finished last in the spring Atlanta race, held 43rd for much of the early stages as the first car to go a lap down. By lap 46, Conway had gone behind the wall along with LASTCAR Cup leader Joe Nemechek in his #87, plus three others who were making their first starts with new teams: Mike Bliss in PRISM Motorsports’ #55, J.J. Yeley in Tommy Baldwin’s #36, and Michael McDowell in Dusty Whitney’s #46. Unlike Conway, none of these four teams had any sponsorship, though McDowell was enlisted by Richard Childress to test a new engine package for the start of the #46 team’s partial switch from Dodge to Chevrolet.

However, inexplicably, all five cars were back on the track by lap 70, each more than 12 laps down to the leaders. This was the first time the underfunded teams had used such a strategy since the spring Phoenix race earlier this year:

When the race’s opening 133-lap green flag run ended with a debris caution, only Bliss and Conway were behind the wall with Conway now in 43rd. Nemechek and Yeley, still on the track, took the wave-around and remained on the track when the green flag waved with Denny Hamlin’s dominant Toyota still out front.

Hamlin’s car was sluggish on the restart, putting him in a three-wide position with Carl Edwards and Martin Truex, Jr. as the field poured into turn one. Hamlin held his own in the Top 5 for ten more laps when, just past the start/finish line on the 144th circuit, the Sport Clips Toyota’s engine erupted in a tremendous plume of smoke. Hamlin slipped in his own oil and slid into the grass, narrowly avoiding contact with oncoming traffic as his #11 came to a rest in the infield. The failure ended Hamlin’s night.

When the race restarted, both Bliss and Conway in 42nd and 43rd were still listed as “off,” allowing both cars to return to the track and attempt to pass Hamlin. On lap 168, Conway was still 43rd, but back on the track 51 laps down. Nemechek was back behind the wall at that point, but he, too, returned on lap 177. Three laps later, Hamlin had slipped to 39th beneath 38th-place Mike Bliss, who finally parked his #55 for good at that point. Unfortunately, this prevented Bliss from passing Elliott Sadler, who retired with crash damage after 150 laps.

J.J. Yeley made another trip to the garage after Bliss’ departure and edged closer to passing Nemechek, still on-track, for 43rd. By lap 195, Yeley returned to the track in 43rd a full 60 laps down to the leaders while Kevin Conway again returned to the pits. With Hamlin and Bliss sliding down the rankings, Sadler’s own DNF pulled him down to 37th by lap 195, separated from the Bottom Five only by Michael McDowell, then 51 laps in arrears:

Conway passed Yeley for 43rd before he returned to the track yet again, finally dropping Hamlin to 43rd and Bliss to 42nd. Sadler slipped past Conway and Yeley for 41st five laps later. Only after Sadler moved by did Conway, Nemechek, McDowell, and Yeley finally leave the race for good in the space of a couple laps. The four drivers finished in that order from 37th through 40th.

CUP STATS AND FACTS
*This was Hamlin’s first last-place finish in two years, dating back to when he was involved in the grinding multi-car crash on lap 17 of the 2008 Best Buy 400 at Dover.
*Neither Hamlin nor the #11 had ever before finished last in a Cup Series race at Atlanta.

EXTRA: SPRINT CUP POLESITTERS WHO FINISHED LAST
*Hamlin is the 36th different polesitter to finish last in a Cup Series race. The last time it happened was when Greg Biffle’s 3M Ford lost the engine after completing 234 laps of the 2008 Dodge Challenger 500 at Darlington. The 95 laps Biffle led in that race were the most of any last-place finisher, but Hamlin’s 74 laps led at Atlanta moved him into a close 2nd.
*The last time a polesitter finished last in a Cup race at Atlanta was 1983, when Geoffrey Bodine’s valve failed 18 laps into the Coca-Cola 500.
*The #11 had not won a pole, then finished last in a Cup race since Cale Yarborough’s engine failed while leading 5 laps into the 1980 Firecracker 400 at Daytona.

The following is a complete list of Sprint Cup polesitters who finished last, including drivers who were awarded the pole after qualifying was cancelled:

This is awesome! Thanks Brock :)