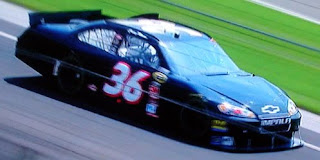 Dave Blaney picked up the 18th last-place finish of his NASCAR Sprint Cup Series career in Sunday’s AAA 400 at the Dover International Speedway when his unsponsored #36 Tommy Baldwin Racing Chevrolet went behind the wall with electrical problems after completing 29 of the race’s 400 laps.

After DNQing at Watkins Glen last month, Blaney departed PRISM Motorsports’ #66 team in search of new Cup Series rides. In the six races since, he has driven both Baldwin’s #36 and Front Row Motorsports’ #38 for five combined races, and has finished under power at the end of three of them.

At Dover, Blaney qualified 38th for the race at a speed of 152.562 mph, more than enough to bump out Ted Musgrave in Blaney’s old #66. Unfortunately, as with the team’s last appearance at Dover (when Johnny Sauter drove the #36), Blaney’s Chevrolet was without sponsorship, forcing him to leave the race early. Curiously, the #36 has not only swept both last-place finishes at Dover in 2010, but in both cases exited the race after 29 laps.

J.J. Yeley, making an unexpected return to Whitney Motorsports to drive its unsponsored second car, finished 42nd in the #81. Current LASTCAR Driver’s Championship leader Joe Nemechek fell out 15 laps later and finished 41st. Nemechek now has a one-finish lead on both Blaney and McDowell, former PRISM Motorsports teammates who are the two most recent last-place finishers in Cup Series competition. Nemechek has not finished last in a Cup race since Michigan, six races ago.

CUP STATS AND FACTS
*This was the second time in 2010 that the same number finished last in both the Cup Series and Nationwide Series events on the same weekend: the #82 finished last with Matt Carter (Nationwide) and Scott Speed (Sprint Cup) at Watkins Glen last month.
*Blaney had never before finished last in a Cup race at Dover.