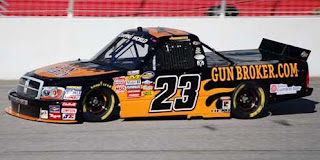 Jason White picked up the 2nd last-place finish of his NASCAR Camping World Truck Series career in Wednesday’s O’Reilly 200 at the Bristol Motor Speedway when his #23 GunBroker.com / Outdoor Channel Outfitters Dodge fell out with engine trouble after completing 28 of the race’s 206 laps.

White was locked-into the field based on Owner Points and qualified a solid 17th at a speed of 121.090 mph. The Daytona polesitter hoped for a good finish, but he lost the engine early in the race and dropped oil, bringing out the third caution of the race. It was White’s third consecutive engine failure in as many races.

Six laps later, LASTCAR Truck Series leader Mike Garvey fell out with rear gear problems. It was the second time in the five races since his most recent last-place finish at Iowa that Garvey finished next-to-last in the field.

TRUCK STATS AND FACTS
*The finish was White’s first in more than nine years, dating back to his rookie season in 2001 when he lost the engine on his #93 Troxell Motorsports Dodge four laps into the 2001 O’Reilly Auto Parts 250 at Kansas. This race is more well-known as the sole Truck Series victory of the late Ricky Hendrick.
*The only other time the #23 finished last in a Truck Series race at Bristol was in 2003, when Phil Bonifield’s ignition failed four laps into the 2003 O’Reilly 200 Presented by Valvoline MaxLife.
*The #23 had not finished last in a Truck Series race since Jamie Aube’s Motor State Performance / Red Line Oil Chevrolet fell out with brake failure 10 laps into the 2003 Virginia Is For Lovers 200 at Richmond. This race immediately followed Bonifield’s aforementioned last-place finish at Bristol, after which Aube took over Bonifield’s ride. Bonifield finished next-to-last in his own truck at the Richmond event.