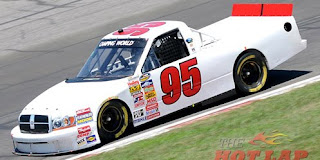 Tim Andrews picked up the 1st last-place finish of his NASCAR Camping World Truck Series career in Friday’s EnjoyIllinois.com 225 at the Chicagoland Speedway when his unsponsored #95 Team Gill Racing Dodge fell out with overheating problems after completing 2 of the race’s 225 laps. The finish came in Andrews’ 5th series start.

Andrews qualified 27th at a speed of 167.806 mph, nearly half a second faster than the #72 of Johnny Chapman and the #99 of John Jackson, who were the only two trucks to miss the race. These newer teams were also the only two not locked-into the field; Andrews was locked into the show and his truck was no longer a post-entry.

Still, lacking sponsorship, Andrews was the first behind the wall. Current LASTCAR Truck Series Driver leader Mike Garvey fell out after 15 laps with transmission problems and finished 33rd. Although continues to lead the 2010 Driver’s Rankings, the four combined finishes by Carl Long, Dillon Oliver, and Andrews have moved the #95 team into a tie with Garvey’s #93 for the lead in the Owner’s Rankings with eight races still to go.

TRUCK STATS AND FACTS
*Dodge now has five consecutive last-place finishes in the Truck Series, four of which all belonging to Team Gill Racing’s #95. The fifth was Jason White’s finish in last week’s O’Reilly 200 at Bristol. G.R. Smith’s #50 was the only other Dodge to finish last in a Truck Series race this year when Smith lost the engine after 27 laps.