N’WIDE: Marks Misses Out At Montreal After Rear Gear Loss 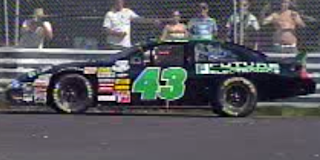 Justin Marks picked up the 1st last-place finish of his NASCAR Nationwide Series career in Sunday’s NAPA Auto Parts 200 Presented by Dodge at the Circuit Gilles Villeneuve when his #43 Future Electronics Ford lost its rear gear during the opening lap of the 77-lap race. The finish came in Marks’ 22nd series start.

Marks qualified 28th at a speed of 93.575 mph, besting nine other teams that were not locked-into the field based on Owner Points. However, Curb Motorsports’ turbulent season continued when his car was apparently spun on the back half of the course during the opening lap, then failed to restart. Marks’ rear gear had failed from the spin, sending him behind the wall by way of a nearby access road. Last week’s last-place finisher Jeff Green, who started last, called it a day the next lap.

Aside from the #26 of Parker Kligerman, who scored a solid 8th-place finish in one of his few funded efforts this season, K-Automotive Motorsports was absent from the Montreal event as both the #96 of Brian Keselowski and the #92, still the leader of 2010's LASTCAR Nationwide Owner’s Standings, withdrew from the entry list earlier in the week. This prevented current Driver’s Rankings leader Dennis Setzer from qualifying, though his #92 was likely going to be driven by either Andy Ponstein or Dan Brode, road racers who drove the car to 42nd-place finishes at Elkhart Lake and Watkins Glen, respectively.

N’WIDE STATS AND FACTS
*Marks is the first Nationwide Series driver to finish last without completing a single lap since Chrissy Wallace’s #41 was involved in a multi-car crash on the opening lap of this year’s season-opening DRIVE4COPD 300 at Daytona.
*The #43 had not finished last in a Nationwide Series race since Aaron Fike’s RFMS, Inc. / Curb Records Dodge lost an engine 5 laps into the 2006 Diamond Hill Plywood 200 at Darlington. Fike was also driving for owner Mike Curb at the time. Thus, the #43 had never before finished last at Montreal as the track held its first Nationwide event in 2007.
*Curb’s team had most recently finished last at Daytona this past July after teammates Jennifer Jo Cobb and Johnny Chapman tangled in a lap 6 accident during the Subway Jalapeno 250.