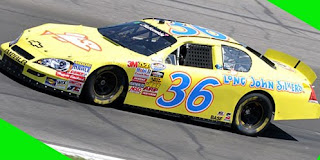 Jeff Green picked up the 9th last-place finish of his NASCAR Nationwide Series career in Saturday’s U.S. Cellular 250 at the Iowa Speedway when his #36 Long John Silver’s Chevrolet fell out with transmission problems after completing 2 of the race’s 250 laps.

Green qualified 29th for the race at a speed of 130.289 mph, besting eight other drivers whose teams were not locked-into the field based on Owner Points. The race marked just the third start of the season for owner Mark Smith’s #36. Just one lap before the race’s first caution fell on lap 3, Green was behind the wall.

2010 LASTCAR Nationwide Series leader Dennis Setzer in K-Automotive’s #92 did not fall out with handling problems until lap 9, continuing a trend where Setzer has finished last in every other Nationwide Series race since Kentucky in June.

STATS AND FACTS
*Jeff Green had not finished last in the Nationwide Series since the 1996 Kroger 200 at IRP when his Dale Earnhardt, Incorporated-owned #3 Goodwrench Service Chevrolet crashed 8 laps into the race.
*The #36 had not finished last in the series since Brent Sherman’s BIG LOTS Chevrolet was involved in a multi-car crash after 10 laps of the 2007 Roadloans.com 200 at Dover.
*Johnny Borneman III’s last-place finish in this year’s Stater Brothers 200 at the Auto Club Speedway marked the only other time in 2010 that a Nationwide Series driver finished last because of transmission trouble.