N’WIDE: Carter Is A First-Time Last-Placer After Brake Problems At The Glen 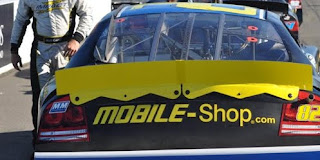 Matt Carter picked up the 1st last-place finish of his NASCAR Nationwide Series career in Saturday’s Zippo 200 at the Watkins Glen International Raceway when his #82 Mobile-Shop.com Dodge fell out with brake problems after completing 1 of the race’s 82 laps. The finish came in Carter’s 19th Nationwide Series start.

As with the Truck Series race, the Nationwide event was short of entrants on the day the official entry list was posted. MacDonald Motorsports was one of three teams that answered the call by putting Carter in a second Dodge as teammate to Michael McDowell’s #81. Also brought on as post-entries were Kevin Hamlin in owner Mark Smith’s #36 and Joey Scarallo in Jimmy Means’ #52.

Carter qualified in the 43rd and final starting spot for Saturday’s race at a speed of 105.031 mph. He followed Hamlin’s #36 behind the wall after the first lap of the race and was thus credited with his first last-place finish. Dan Brode, a young Californian road racer, made his inaugural start as driver of Brian Keselowski’s #92, but Brode was unable to secure the team’s 11th last-place finish of 2010 when he pulled out after 2 laps. Unlike Keselowski’s #26, Brode’s car appeared to be an intermediate track car which lacked any visible brake ducts.

McDowell, in MacDonald Motorsports’ primary car, had an outstanding 10th-place finish despite receiving tremendous damage to the front of his K-Love Dodge in a grinding 10-car wreck on lap 24. The run was the team’s best finish of 2010, following a 13th-place finish last time out at Iowa.

N’WIDE STATS AND FACTS
*The #82 had not finished last in a Nationwide Series race since Kevin Grubb’s Virginia Is For Lovers Chevrolet crashed out 60 laps into the 1997 Winston Motorsports 300 at South Boston. Grubb had started 6th in the 32-car field. The number had never before finished last in a race at Watkins Glen.
*Carter joins Chrissy Wallace (Daytona) and Michael Annett (Talladega) as the only three first-time last-place finishers of the 2010 Nationwide Series season.

Special Thanks to MacDonald Motorsports for providing the above-posted photo of Carter’s #82 Dodge prior to Saturday’s qualifying session.
Posted by Brock Beard at 11:12 PM