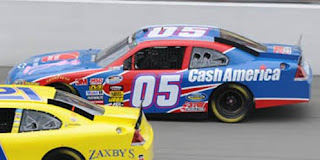 Willie Allen picked up the 3rd last-place finish of his NASCAR Nationwide Series career in Saturday’s Carfax 250 at the Michigan International Speedway when his #05 Cash America / Owens Corning Chevrolet fell out with transmission problems after completing 2 of the race’s 125 laps.

Allen qualified 24th for the race at a speed of 173.548 mph, making his “Second-Generation” Chevrolet the 4th-fastest of the 14 cars not locked-into the field on speed. Unfortunately, Allen was forced to make an extended pit stop just two laps into the race. Even though Kevin Lepage pulled owner John McNelly’s #56 behind the wall during Allen’s stop, Allen was credited with 43rd when he failed to return to the track.

All-time LASTCAR leader Derrike Cope finished 39th when ignition troubles forced him out 10 laps in while Johnny Chapman, still tied with Lepage for 7th all-time and 3rd in the Nationwide standings, had the only car that failed to make the race.