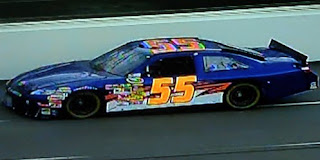 Michael McDowell picked up the 5th last-place finish of his NASCAR Sprint Cup Series career in Sunday’s Sunoco Red Cross Pennsylvania 500 at the Pocono Raceway when his unsponsored #55 PRISM Motorsports Toyota fell out with a vibration after completing 23 of the race’s 200 laps.

McDowell qualified 36th for the race at a speed of 166.979 mph. In the early stages of Sunday’s race, it appeared that Todd Bodine, driving Larry Gunselman’s #64, was on his way to his 17th Cup Series last-place finish when he went behind the wall during the first caution on lap 16. Joining Bodine were both Casey Mears in Tommy Baldwin’s #36 and J.J. Yeley, the top “go-or-go-home” driver in qualifying, in Dusty Whitney’s #46.

However, all three cars returned to the track, including Bodine, who by lap 43 was still running, albeit 18 laps down. By then, both McDowell and PRISM Motorsports teammate Dave Blaney had fallen out for good. McDowell edged Blaney for the spot by one lap, preventing his teammate from tying Joe Nemechek once more for the 2010 LASTCAR Cup Series lead.

It was the fourth time in 2010 that the two PRISM Motorsports cars finished 42nd and 43rd in the same Cup race. They also did so at Martinsville, Phoenix, and in the Coca-Cola 600 at Charlotte.

STATS AND FACTS
*McDowell had not finished last in the Cup Series since his #66 Toyota overheated in this year’s Subway Fresh Fit 600 at Phoenix. At the time, McDowell and Blaney were driving each other’s cars: Blaney finished last in McDowell’s #55 the next week at Texas.
*The #55 had not finished last in a Cup race at Pocono since Michael Waltrip’s NAPA Toyota blew an engine 24 laps into the 2008 Sunoco Red Cross Pennsylvania 500. These two races are the only time the number has finished last since Pocono came on the Cup circuit in 1974.
*This was only the second time in 2010 a Cup Series driver finished last because of a vibration. Aric Almirola’s run in James Finch’s #09 at this year’s Shelby American at Las Vegas was the other time it happened.